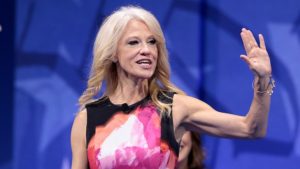 Thank you, Kellyanne Conway, for the parting gift you delivered as you prepare to return to some semblance of a private life.

The soon to depart senior adviser to Donald Trump has said out loud what many of us have thought all along, which is that that more rioting, looting and violence occurs the better it is for Donald Trump’s re-election chances.

According to Business Insider: “The more chaos and anarchy and vandalism and violence reigns, the better it is for the very clear choice on who’s best on public safety and law and order,” Conway said during an interview on “Fox and Friends.”

Gosh who do you think to whom she refers? In other words, according to Conway, Trump wants the rioting to continue.

Let’s roll that around for a brief moment.

Presidents of the United States usually seek to calm roiling waters. They usually seek to quell national tensions with speeches that appeal to our better angels. They want stability, calm, peace and quiet in our cities.

Not this clown. Not Donald Trump. If we are to believe Kellyanne Conway — who is leaving her office this week to spend more time repairing the damage done to her family — Trump is so damn concerned about re-election he wants to fan the anger that simmers in places like Portland, Kenosha, Minneapolis. Trump refuses to speak to the protesters or to even say the names of the individuals who have died at the hands of rogue cops.

Many of us out here in Flyover Country are left to wonder about what is going through what passes for Donald Trump’s mind. Well, we don’t need to wonder any longer. Kellyanne Conway has laid it out there for us in plain view.

I wish Conway well as she steps away from the White House. I also want to thank her for telling us what I believe to be the truth about what motivates Donald Trump effort to stay in power.

I hope it helps derail the Donald Trump re-election train.

Allow me this request.

How about stopping the quibbling and quarreling over the use of the term “thugs” to describe individuals who loot, pillage, burn and otherwise destroy other people’s property — not to mention injure or kill others — while rioting?

Dennis Prager, writing for RealClearPolitics.com, seems to think liberals have gotten thin-skinned about using the term. Liberals, according to Prager, seem to think it connotes someone’s race.

I consider myself a liberal thinker. I know other liberals, friends of mine. I’m unafraid to use the term. I mean nothing other than to describe the activity of the individual doing the misdeed. A thug is a thug. Period.

It doesn’t. Honest. The term covers many aspects of misbehavior. If you mug someone on the street, you’re a thug. If you like to fight others just to prove your manhood, you’re a thug. When I was growing up, if you “TP’d” someone’s house with toilet paper, you were a thug; these days, such activity is considered a compliment if you’re a teenager.

This notion that the rioters who destroyed businesses in Baltimore and other communities of late were labeled “thugs” because of their race is ridiculous on its face.

A team wins the World Series or the Super Bowl or the NBA championship. Fans who live in the city of the winning team are so delirious they storm the streets, turn over cars, light them on fire. Last time I witnessed one of these events on TV, I noticed a lot of white folks among them. They’re thugs, too.