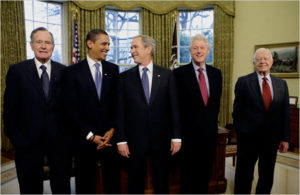 President Biden has done something during his first 100 days in office that pleases me greatly, even though I admit it is merely a matter of symbolic outreach.

Biden has reactivated The Presidents Club, the group of men who understand the trials and turmoil associated with the nation’s highest office. He has called on them prior to making key decisions. He has sought their counsel.

Oh, I should mention that one of the members — Donald Trump — is still left out. He will remain an outcast likely for as long as he lives.

You see, Trump tossed aside the symbolism associated with The Presidents Club. He ended up insulting every one of his living predecessors before he left office in January.

President Biden isn’t wired that way. He called President Bush when he announced his decision to end our troop involvement in Afghanistan. He notified President Obama of the same decision. Biden this week paid a visit to President and Mrs. Carter in Atlanta when he visited Georgia to make a pitch for his latest economic stimulus package.

Given that Donald Trump is still trying to overturn the 2020 election results and continues to undermine his successor, do not look for Biden to reach out to Trump at any time on any issue that confronts him.

Yes, none of this matters in terms of policy. It does illustrate the value of the wisdom that former presidents bring to the current occupant of the White House.

It also illustrates how President Biden is wired and how he intends to demonstrate his understanding that he might not possess all the answers to all the problems he will face. 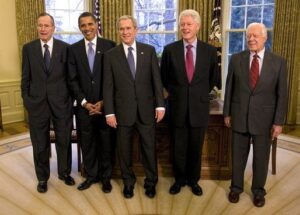 The picture you see here was taken in late 2008.

President-elect Barack Obama came to the Oval Office to meet with the man he would succeed, President George W. Bush, and three other fellows with intimate knowledge of the office: Presidents George H.W. Bush, Bill Clinton and Jimmy Carter.

President Bush 43 offered his support and good wishes to the new president. All of these men had lunch together that day and the former presidents shared with the new guy some of the wisdom they acquired while making difficult decisions.

I won’t belabor the point, but just try to imagine …

Donald Trump inviting the man who would succeed him, President-elect Joe Biden, to the Oval Office along with the four living former presidents, Barack Obama, George W. Bush, Bill Clinton and Jimmy Carter.

I know. It’s way beyond anything you could ever see happening.

It must be true, that Donald Trump refuses to join the Presidents Club, the exclusive organization reserved only for commanders in chief and their predecessors.

Two of his immediate predecessors, Bill Clinton and Barack Obama, have been targeted by someone who wants to terrorize them by sending them pipe bombs in the mail. There’s also a former vice president, Joe Biden, who’s been targeted with two of those devices. Oh, yes, and how about Hillary Clinton, wife of the 42nd president and Trump’s 2016 presidential campaign opponent?

The president hasn’t called them. He hasn’t offered them comfort. Nor has he told them how sorry he is about the acts that have been perpetrated against them — and against other Democratic political figures and CNN, the cable news outfit.

Hey, Trump doesn’t even have to do any of this for public consumption. He could just pick up a phone at the White House — preferably a “secure phone” — to call the men who preceded him as head of state. He could talk to them privately.

He won’t do that. He appears incapable of doing the right thing where they are involved.

Trump has taken the criticism leveled against intensely personally. It has come from the former presidents, the ex-vice president, his former 2016 campaign foe, two intelligence leaders, a campaign donor, a U.S. senator and a member of the U.S. House, a New York governor.

Then there’s CNN, the outlet he calls “fake news,” the embodiment in Trump’s view that the media are the “enemy of the people.” He can’t call CNN’s execs to offer a word of comfort to them, either.

The Presidents Club traditionally has been a chummy group. Former foes become good friends. They team up to work on humanitarian causes. The spend time recalling their time in the hot seat in front of crowds. They joke with each other.

What’s more, and this is critical, they make themselves available to the current president who might wonder: What would any of them do when faced with a particular problem?

Donald Trump is having none of that.

Two former presidents and a former vice president have been identified as victims of what appears to be a terrorist. A phone call from their successor would provide some level — maybe only a tiny level — of comfort during this highly stressful time.