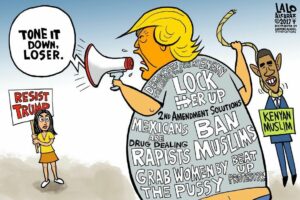 It was too much to expect a quick fix, an early and immediate end to the angry rhetoric that accompanied the tenure of Donald Trump as president of the United States.

Perhaps it was naive to expect such a miraculous occurrence.

Still, with President Biden’s aggressive approach to dealing with the myriad crises confronting the nation, I had a smidgen of hope that there might be some relief from the white-hot expressions coming from those on the right, the far right and from the political loony bin.

One week into the Biden presidency, I continue to wait for the relief. I fear it’s going to take a long while.

We keep hearing from the QAnon nut jobs who were elected to Congress. The Trumpkin Corps keeps yammering about how their voices will not be stilled, that by golly, more than 74 million of them cast their ballots for The Donald. They ignore the obvious, which is that President Biden collected 81 million-plus votes. And … he rolled up 306 Electoral College votes, the same number Trump pulled in four years earlier; remember, too, that Trump called his victory in 2016 over Hillary Clinton a “landslide,” which of course it was nothing of the sort.

My sincere eternal hope is that we can restore much more civility to our discourse than we have seen and heard during the Trump Era. Donald Trump is vanquished from the White House. His minions in Congress remain in office. They continue to whoop and holler about vote fraud. They bitch about Joe Biden’s aggressive use of executive orders. They gripe about his big and bold ideas to salvage our economy. The lunatics among them keep using social media to harp on conspiracy theories resulting from all the lies that Trump fed them.

The tone will improve. That’s my hope. I await the day I when can call it my expectation. 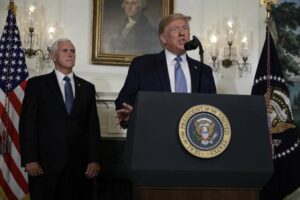 Donald Trump today laid the blame on the mass shootings at the feet of several institutions and cultural trends.

He blamed the Internet for promoting violence, the media for their “fake news” reporting, a lack of mental health awareness and care, the preponderance of violence-ridden video games.

I’ll accept that most of those causes as valid areas of concern; the media, though, have been singled out only because of the president’s hatred and mistrust of them.

What he didn’t do was take any personal responsibility for the coarseness of the political dialogue. Therefore, if I were writing his remarks, I would have added something like this:

Finally, and most significantly, I want to call attention to the coarse rhetoric that has infected our political discourse. I also want to express my personal regret for contributing to it.

Yes, I declared my presidential candidacy in 2015 with a direct assault on Latin American immigrants who were — and still are — crossing our border illegally. However, I went too far in ascribing criminal intent to too many of them. For that I apologize.

Furthermore, from this day forward I am going to dial back my own hard-bitten rhetoric. I will pledge to work openly toward developing a more civil political climate.

My regret runs deep and I am sorry for whatever I have done to inflame the deeply held passions to which I have referred already in the wake of the El Paso and Dayton massacres.

Why didn’t he say that? It’s simple. Donald Trump does not possess the gene that allows him to express regret for any mistake he commits. So he shrouds institutions and people all around him with blame and responsibility for matters that he –as the president of the United States — has the power to control all by himself.

He once said that “I, alone” can fix what ails the country. He ought to say that “I, alone” will demand an end to the hate-filled rhetoric that has poisoned our political atmosphere. 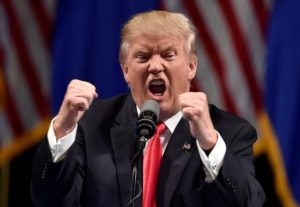 Dear Mr. President … I heard your remarks — along with those of the first lady — at the White House condemning the attacks on “former high government officials.”

You left out any mention of the bomb that was sent to CNN’s New York offices. Yes, all the intended targets have been critics of yours or have been the object of your own scorn. CNN is one of them. Maybe you can say something later today or tomorrow … or the next day.

Here’s my current request, Mr. President: I hear you’re headed for a campaign rally in Wisconsin later. You’ll be standing behind that podium in front of a raucous crowd of supporters. Will you, sir, be mindful of what has transpired today and tone down the rhetoric?

Many millions of us, Mr. President, will be listening intently to what you say and listening as well to how you say it.

You’re the president, the only one we have. All eyes are on you, which I suspect is precisely what you like most about being in the office you occupy. Therefore, it is imperative that you speak to your supporters using language that is far less inflammatory than what you’ve been using during your entire presidency.

I truly believe, sir, we are reaping one of the dire consequences of what you and your bloc of base voters have sown.

Tone it down, Mr. President. 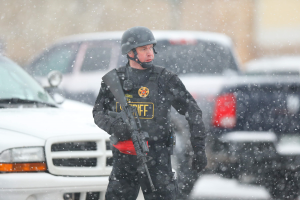 I believe it is fair to ask: Has the fiery rhetoric condemning Planned Parenthood resulted in the shooting deaths of three individuals at the hands of someone who has told police “no more baby parts”?

Three people died this week when a man opened fire at a Planned Parenthood clinic in Colorado Springs.

Police arrested Robert Lewis Dear after a siege that lasted several hours. The motive was unclear immediately after Dear’s arrest. Then today he reportedly told police about the “baby parts” and how he wanted to prevent future harvesting of those organs from aborted fetuses.

Many of us have seen those videos taken at another Planned Parenthood clinic. It shows staffers discussing the harvesting of body parts. What has become known generally since then is that videos were edited heavily to portray gross indifference among the staffers.

And that — sad to say — triggered some of the rhetorical firestorm emanating from Congress and along the presidential campaign trail.

Yet the rhetoric became stoked by politicians looking for sound bites, producing tremendous anger among many Americans. Sadly, much of that anger was based on false pretenses.

Now we have this. Someone has taken three lives and injured several other individuals.

I am acutely aware that the shooter will have defenders who say he is “righteous” in seeking to justice over the practice of abortion.

I have no intention of entering the abortion debate. I do intend to suggest that politicians seeking to express their own righteous indignation over medical procedures that in fact are legal need to consider the consequences of fomenting anger.