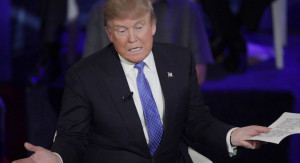 Somehow, you just knew this would happen.

Back when there were many more Republican Party candidates for president, they all signed a “pledge” to back whoever the party nominates.

That was then. Now that we’re down to just three men standing, they all now are going back on their pledge. As noted Republican analyst Matthew Dowd said this morning on “Good Morning America,” he never considered the pledge to be “the Magna Carta,” meaning he’s not surprised that the candidates are walking back their pledge of support for the other guy.

Well, this is a byproduct of what has been the least dignified presidential campaign in memory — if not in history.

Donald J. Trump said the Republican Party has “treated me very unfairly.” The frontrunner is mad because the GOP brass doesn’t want him to be the nominee and is staying up into the wee hours concocting a scenario that would deny him the nomination at the party convention this summer in Cleveland.

Rafael Edward Cruz has said he is “not in the habit” of supporting candidates who attack his family, which the frontrunner — Trump — has done.

John Kasich is no fan of either of the other guys. He especially appears to detest Trump and has said — almost categorically — that the frontrunner won’t get his support if he’s the nominee. As for Cruz, should he be the nominee, a Kasich endorsement also sounds a bit iffy.

Trump, to no one’s surprise, said he never “pledged” anything. I guess that picture of him holding up that document in which he signed his name was a mirage.

A friend of mine reminded me this morning of something a prominent Texas Panhandle politician used to say about how Republicans treat each other. They resort to a form of cannibalism.

The comment came from the late state Sen. Teel Bivins of Amarillo, who used to joke that redistricting, which the Texas Legislature performs every decade after the census is taken, is when “Republicans eat their young.”

He said he hated the redistricting process. “Sure you do, Teel,” I would tell him. He just couldn’t stop doing it.

Are we seeing the three remaining GOP presidential candidates “eat” each other? They just might take this intense dislike with them to that convention in Ohio late this year.