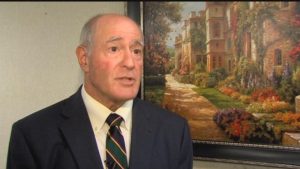 I have to weigh in one more time — although quite possibly not the final time — on the growing Texas Senate feud between Lt. Gov. Dan Patrick and Kel Seilger, an Amarillo Republican.

The way I see it, Patrick is acting as if he employs the 31 members of the state’s upper legislative chamber. That ain’t the case, fella. They work for us. They work chiefly for the people who they represent in their respective Senate districts as well as for those who live in other parts of the state, given that they enact laws that affect all Texans.

The lieutenant governor stripped Seliger, a seasoned veteran of the Legislature, of all his committee assignments. Why? According to Seliger it is because the two men have different world views and legislative priorities; Patrick claims he did it because Seliger reportedly has a potty mouth and made some “lewd comments” to a female Patrick staffer.

Either excuse seems to point to a dictatorial streak being exhibited by Lt. Gov. Patrick.

The Dallas Morning News this morning published a lengthy feature on Seliger and the reputation he enjoys among his Senate colleagues. I’ll attach it to this blog post. Spoiler alert: The reporter, Lauren McGaughy, called yours truly for comments on Seliger, and she included some of them in this piece.

My point here is that Seliger answers to West Texans first and to the rest of the state second. Patrick place on the senator’s pecking order priority list is a very distant third.

I already have stated my pro-Seliger bias in this dust-up. The Texas Panhandle — where I used to live — and the rest of Seliger’s vast Senate District 31 have been disserved mightily by Patrick’s petulance. He referred to Seliger in an earlier DMN piece as a “corrosive force” in the Senate. The comments given to the Morning News by senators in both political parties paint a vastly different picture of the man with whom they have worked and served our great state.

I will continue to stand by my friend, Sen. Seliger. 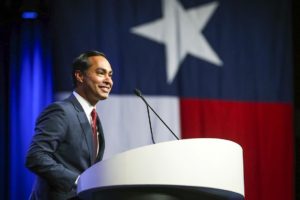 I must be hallucinating, or having some sort of flashback . . . which I assure you isn’t drug-induced.

Texas Democrats, not Republicans, are all agog over the looming struggle for attention between two rising stars. One of them came so very close to being elected to the U.S. Senate; the other is a former big-city mayor and a former housing secretary for the most recent Democratic president.

O’Rourke almost defeated Republican Sen. Ted Cruz in the midterm election; he might run for president of the United States in 2020. Castro was mayor of San Antonio, the state’s second-largest city and served in the Cabinet of Barack H. Obama; he, too, might run for POTUS.

Of the two of them, Castro seems the surer bet to toss his Stetson into the ring, although O’Rourke keeps tantalizing many around the country with messages that suggest that he, too, is likely to join the Democratic free-for-all.

Texas once was a Democratic bastion, where only Democrats were seen and heard. Then it morphed into a Republican stronghold and the GOP snatched all the headlines, the air time and people’s political attention.

It’s now becoming more of an inter-party competition, instead of an intra-party donnybrook. I like the idea of the two parties fighting hard for the hearts and minds of Texans and other Americans.

As for O’Rourke and Castro, I am beginning to sense a rivalry in the making.

Politico reports that a Texas political strategist, Colin Strother, sees the two men’s disparate upbringing well could produce a unique situation in Texas. They won’t be fighting for the same constituency, Strother guesses. “I see them as two completely different types of candidates,” he said.

Castro sees himself as the underdog, given O’Rourke’s meteoric rise while losing his race to Cruz. He has a twin brother, U.S. Rep. Joaquin Castro, who’s been helping him raise money to try to bring down the O’Rourke colossus.

O’Rourke, you might recall, campaigned against Cruz without the help of high-powered, top-dollar political consultants and/or pollsters. He just visited every one of Texas’s 254 counties, talked to voters wherever he found them. What astounded me was the amount of time O’Rourke spent in GOP-stronghold counties in rural West Texas, from the Panhandle to the Permian Basin. Didn’t anyone tell him the Panhandle is where the John Birch Society used to give “mainstream politicians” fits?

I don’t know whether both — or either — of these young men are going to vie for the Big Prize in 2020. I’m just delighted to see the excitement they both are generating in a state that has grown quite unaccustomed to hearing noise from Democrats’ side of the fence.

If you want to witness how the fight for the heart and soul of the Republican Party is taking shape, those of us in West Texas need look no further than right here at home.

State Sen. Kel Seliger is in the midst of what could become a hard-fought GOP primary battle against two men who are trying to outflank the Amarillo lawmaker — on the right.

Seliger is having none of it. 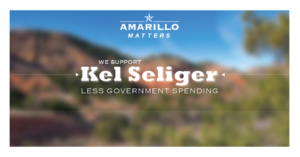 This Facebook image tells me how Sen. Seliger is showing off his own brand of conservatism to voters who might have their doubts about him. I also have noticed a significant change in the tone of his TV ads of late.

There’s an ad showing Seliger talking about his desire to see local control have preference over the running of public education. Then he piles into a pickup and drives away; but then you notice a National Rifle Association sticker on this rear window as he puts the pedal to the metal.

Seliger’s two GOP foes — former Midland Mayor Mike Canon and Amarillo restaurant owner Victor Leal — are getting backed by ultraconservative political action groups. Seliger isn’t relying on that kind of political activism, although Amarillo Matters — a local PAC — has signed on with its own endorsement and efforts to push Seliger across the primary election finish line well ahead of his challengers.

Let me be clear: I want Seliger to return to the Texas Senate, where he has served with clear-headed distinction since 2004.

Seliger’s endorsement from the NRA doesn’t exactly thrill me. I am no fan of the NRA and its hard-core resistance to any kind of legislation that seeks to end the scourge of gun violence. That group’s backing of Seliger, though, doesn’t dissuade me from backing his re-election bid.

What I find fascinating about Seliger is his knowledge of all the issues relating to the sprawling District 31, which runs from the very top of the Panhandle to the Permian Basin, which is about 400 miles — or about a seven-hour drive just one way. As I’ve noted, Seliger — a Borger native — is just as fluent in Permian Basin-speak as he is in Panhandle-speak.

His immediate political goal is to win the GOP primary in March outright. He doesn’t want to end up in a runoff. So, to avoid that possibility Seliger is highlighting his brand of conservative values. It’s not a holier-than-thou brand. Instead it is a level-headed realization of the constituency he represents.

If he is looking for any political advice on how to avoid a runoff, perhaps he should seek it from Potter County Judge Nancy Tanner, who in 2014 managed to win her primary race outright, with four other candidates on the ballot; and to think that Tanner pulled off that feat in her first political campaign.

Let it be said, too, that Sen. Seliger is no novice.

An interesting survey popped up on MSN.com that showed the cities with the five best economies in the United States.

Of the five, four of them have something in common: oil.

The energy-related economies that made the top five are: Midland and Odessa, Texas, Fargo, N.D., and Sioux Falls, S.D. Midland and Odessa ranked Nos. 1 and 2, respectively. The third-best local economy belongs to Pascagoula, Miss.

This is an interesting development in that Midland and Odessa experienced tremendous booms in the 1970s when the price of oil “skyrocketed” to what then was considered a huge price for a barrel of oil: about $40 and change. Midland built skyscrapers downtown, creating a skyline in a city of about 80,000 that would become the envy of city planners in much-larger communities. Those gleaming, tall buildings would go dark in the 1980s as the price of oil collapsed and companies declared bankruptcy.

I was living in Beaumont at the time and watched petrochemical plants lay off thousands of employees as the demand for their products fell precipitously.

The cycle is repeating itself now in the Permian Basin and way up yonder in the Dakotas, where communities are being remade into something no one recognizes as drilling contractors pour into the region to explore for shale oil buried in what’s believed to be the largest petroleum reserve on the planet.

Let’s wish them luck during these boom times. They might need plenty of it if the oil economy collapses yet again — which could happen.

Those who’ve lived through some of these cycles before understand full well about the nature of that particular industry.

A word of caution: Start planning for some serious economic diversification.

Gasoline prices were rocketing skyward. The U.S. government was under fire for failing to do more to encourage domestic oil exploration and production. Republicans across the land were lampooning the Democratic president for his abject failure to draw us closer to the day when we wouldn’t have to depend on foreign sources to run our industries and fuel our vehicles.

Now comes word that the Gross Domestic Product grew at an annual rate of 2.5 percent, which is greater than what economists predicted. The cause of that spike in GDP growth? Domestic oil production.

Domestic oil production is at a 17-year high, according to White House economists. Are they being objective? Well, no neutral observer has questioned the numbers.

There’s plenty of anecdotal evidence in West Texas to make the point. The Permian Basin boasts the lowest jobless rate in the state. The reason? The huge demand for oil-related jobs.

I’ve been talking to friends and acquaintances with business interests in the Midland-Odessa area and they all say the same thing: You can’t get housing there; hotel rooms are booked up; those high-rise Midland skyscrapers, the ones built in the 1970s that went vacant when the oil industry crashed in the mid-1980s, have filled up again with tenants.

But don’t rely on that kind of chatter. There appears to be plenty of hard evidence of a turnaround.

All of this bodes pretty well for the United States as Americans watch with intense interest in developments in the Middle East. Egypt looked on the verge of exploding once again. Syria remains a serious question mark for the United States. No one can predict with any certainty what will happen in a region of the world from which we still get a lot of our oil.

Meanwhile, the pump jacks are still working hard here at home. North Dakota is becoming the next “Texas” and/or “Alaska.” Reports indicate an oil field discovery there that will dwarf the reserves known to lie under the Saudi sand.

And I haven’t even mentioned all the “alternative energy” sources being developed, such as the Panhandle wind farms.

Why are the critics so quiet these days?