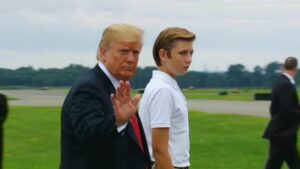 I won’t back away from my belief that Professor Pamela Karlan erred in mentioning Barron Trump, the president’s youngest child, in her testimony this week before the U.S. House Judiciary Committee.

She sought to make a quip about how the Constitution doesn’t allow presidents to create nobility among citizens, saying that even though he could name his son “Barron,” he couldn’t make him a “baron.” Critics jumped all over Karlan, who later apologized for her remark.

I want to add that she said nothing critical about the boy. There was no snarky intent directed at the teenager.

I also want to point out that previous first sons and daughters haven’t escaped the public’s barbs. Indeed, those children of presidents have absorbed plenty of hurtful punishment from cruel Americans.

Do you remember snide remarks made about, oh, Amy Carter, or Chelsea Clinton, or Barbara and Jenna Bush, or Malia and Sasha Obama? For that matter, do you remember, too, how critics of President Obama questioned his birth, his faith?

Look, children of presidents are off limits. Professor Karlan did not need to invoke Barron Trump’s name while making some sort of silly quip about constitutional limitations on the presidency. Then again, what she said was bland compared to the poisonous rhetoric that’s been thrown at presidential children over many years.

Let us just not go there. Hmm? 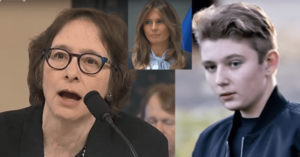 “Pamela Karlan, you should be ashamed of your very angry and obviously biased public pandering, and using a child to do it.”

So said first lady Melania Trump via Twitter in response to a university professor’s unfortunate invoking of Mrs. Trump’s son, Barron, during testimony today before the House Judiciary Committee.

Professor Karlan said that while it is all right for the president to name his son “Barron,” he couldn’t “make him a baron.”

That drew the expected criticism.

Frankly, she deserved to take the hit for the remark, for which she apologized.

Now, this likely won’t quell the critics. It should, but they’ll continue to yammer at her. We have learned in this political climate that apologies often never go far enough to absolve someone from the transgression they commit.

In this instance, Pamela Karlan’s mistake was clearly defined. Politicians’ children should be off limits … always! She crossed a line that was equally defined.

I am heartened to have listened to her apology as she made it. I am guessing Karlan might have known of the consequence of that mistake the moment she uttered it.

The heated debate in Washington is only going to get even hotter as this impeachment matter progresses toward a full vote in the House of Representatives. The president and his key aides have provided all by themselves the world with plenty of grist for which they can be criticized.

The president’s young son is way off limits.