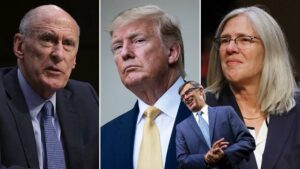 The director of national intelligence, Dan Coats, is heading for the door Thursday. He served the nation with diligence and distinction. He spoke the truth about the threats to the nation.

The president of the United States, Donald Trump, didn’t listen to him. Coats will be gone very soon.

Gordon is leaving office along with Coats.

What is wrong with this picture? Plenty. I now will explain briefly.

The DNI office now is without its top two intelligence officials. Coats is a politician, having served in the U.S. House and Senate before taking on the DNI job in the Trump administration. However, he stood behind the intelligence professionals who determined without equivocation that Russians attacked our electoral system in 2016 and are doing so yet again in advance of the 2020 presidential election.

Coats butted heads with Donald Trump. He “spoke truth to power.” The man with the power, Trump, isn’t hearing it.

As for Gordon, custom dictated that she would have stepped into the DNI spot as the acting director. She, though, took the advice of intelligence pros and submitted her resignation.

Trump now has Joseph Maguire as acting DNI. He comes from a counterintelligence agency. He could be a solid choice, but he lacks the overarching background that Sue Gordon would have brought to the office … had she chosen to stay on in the Trump administration.

Ladies and gents, we have a leadership vacuum at the top of our nation’s intelligence apparatus. As for the president, he continues to demonstrate utter cluelessness on how he intends to protect us from hostile powers that are threatening the integrity of our very system of government. 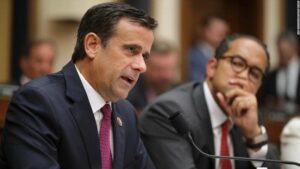 What in the name of critical thinking is going on here?

Might there be a glimmer of hope that Republican U.S. senators are willing finally — finally! — to break ranks from behind their fellow Republican, the guy in the White House?

Reports are surfacing that Republican response to Donald Trump’s pick to be the next director of national intelligence is, shall we say, a bit tepid. GOP senators reportedly are saddened by the departure of DNI Dan Coats, who once served with them in the U.S. Senate. They have said much about Coats, but hardly anything about U.S. Rep. John Ratcliffe, who is Trump’s selection as a successor to Coats.

Hmm. Why do you suppose that’s the case?

It might be that the Northeast Texas cheerleader for Trump is packed a bit too snugly into the president’s hip pocket.

I remain committed in the hope that senators who will question Ratcliffe during his confirmation hearing will ask him whether he believes, as Coats does, that Russians attacked our election in 2016 or whether he stands with Donald Trump’s phony assertion that it’s a “hoax.”

I get this sinking, gut-wrenching feeling that Ratcliffe’s fealty to Trump will not allow him to state the plainly obvious, which is that the Russians interfered on behalf of Trump in 2016 and are working hard to do the same thing in 2020. That’s the view of the FBI, the CIA, the National Security Agency and the Joint Chiefs of Staff … and the Director of National Intelligence. Donald Trump is hearing none of that.

The DNI, who is the nation’s top intelligence official, should be required to tell the president what he needs to hear, not what he wants to hear. Donald Trump must hear from the DNI where the existential threats to our national security are coming from. Coats and other intelligence experts told the nation that Russia presented that threat in 2016 and are doing so now.

Will the new DNI, if it’s John Ratcliffe, be willing to offer the same hard-boiled advice?

My gut tells me that Donald Trump won’t hear it even if the DNI offers it, which is why he might be looking for a blind loyalist to fill a job that requires clear-headed analysis on threats to our nation.

Director of National Intelligence Dan Coats reportedly is about to be canned by the president of the United States.

Donald Trump supposedly is angry because Coats isn’t a “team player”; he doesn’t display outward “loyalty” to the president. 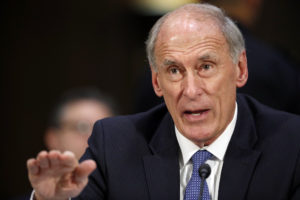 Good grief! DNI Coats is telling the truth. His truth-telling runs counter to the messages that the president delivers.

Trump said the Islamic State is “defeated”; Coats said ISIS is still recruiting members and is still capable of inflicting damage on targets; Trump said North Korea is no longer a nuclear threat; Coats said North Korea is continuing to develop nukes; Trump said Iran is a direct threat to the Middle East and is working toward developing a nuclear bomb; Coats said Iran is following the terms of the nuclear deal that bans the Islamic Republic from developing nuclear weapons.

Is there a pattern here? Sure there is. Trump is lying about national security matters; Coats is telling the truth.

As we know about the president, he has barely a passing acquaintance with the truth.

Coats and Trump reportedly never have clicked. Coats is a veteran Republican politician: a former GOP member of the House and a senator from Indiana, as well as a former U.S. ambassador to Germany. He knows the ropes in Washington. He has friends and allies on both sides of the widening political chasm.

He also is prone — as they say — to speak truth to power. So he has done that. Coats’ penchant for honesty now is reportedly going to cost him his job. It also would cost the nation another grownup in a presidential administration that is sorely lacking in them.

Trump was asked this week if he is about to fire Coats. He responded that he hasn’t “even thought about it.”

Do you believe him? Neither do I.