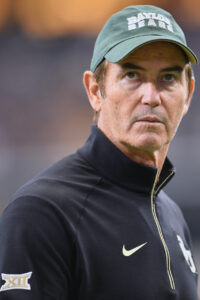 Mount Vernon High School — over yonder in East Texas — has opened its 2019 football season with five straight wins. Their new coach, Art Briles, came to his job with a huge cloud hanging over his head owing to his dismissal as head football coach at Baylor University.

What is coming? The justification from some football fans that it’s OK for Mount Vernon Independent School District officials to have hired Briles to coach these young men even though he is tainted by a scandal that threatened to swallow up the Baylor program.

The scandal involved some student-athletes who were raping women around Waco. Those athletes were players under Briles’s tenure as the head coach at Baylor. He said this was going on with his knowledge of it. The Baylor regents were buying it. They dismissed Briles, the athletic director quit and, oh yes, the Baylor University chancellor, a fellow named Kenneth Starr, was demoted; he eventually left the university. Why mention Starr? Well, because he was special counsel during the Bill Clinton inquiry into, um, sexual misconduct involving the president — which ended up with Clinton being impeached by the House of Representatives in 1998.

Does an unblemished record expunge Briles from the scandal that took him away from a winning Division I college football program? Not in the least. I remain dubious about his hiring at Mount Vernon HS in the first place. The board of trustees could have found another highly qualified coach without the taint that stained Briles at Baylor.

But hey, as the saying goes: Winning is everything!