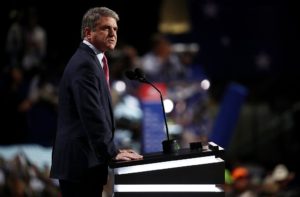 There’s a common stereotype kicked around about Republicans and Democrats.

I want to take on the GOP stereotype briefly here by calling attention to something U.S. Rep. Mike McCaul of Texas said about four of his Republican colleagues who voted recently against a package that include $15 billion in aid to victims of Hurricane Harvey.

You’ve heard of Harvey, yes? It blew in twice over the Texas coast, ravaging communities from the Coastal Bend to the Golden Triangle. Four of McCaul’s GOP colleagues voted “no” on the aid package because it sought to raise the debt limit ceiling.

One of the four happens to be my congressman, Mac Thornberry of Clarendon.

Here’s what McCaul said, according to Texas Monthly: “I don’t want to judge them,” McCaul said Monday on MSNBC’s Morning Joe, according to the Austin American-Statesman. “I judge myself and my conscience, and when I have people dying and hurting in my home state, it was my duty and my moral obligation to help them, and I felt that that vote was a vote of conscience to help people in my state and also now in Florida. I think that’s what Americans do, and I think it’s unconscionable to vote against something like that.”

Actually, he did “judge them.” But that’s all right with me. Judge away, Rep. McCaul.

More from Texas Monthly: “I think having to raise the debt ceiling was the issue, and the fact is that Mick Mulvaney is the director of [the Office of Management and Budget], and he was a Freedom Caucus guy when he served with us, and he told us point blank that you could not appropriate disaster relief if you didn’t raise the debt ceiling, so we were stuck with that choice,” McCaul said. “What do you with that choice? Just stand on principle and vote ‘no’? And I question that principle. Or do you vote to help people back in your home state who are hurting really badly?”

So, let’s end the stereotyping.