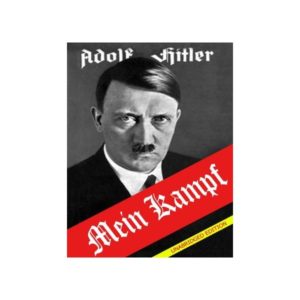 Of all the works that a member of the U.S. House of Representatives wanted to use to illustrate a point, he chooses to stand on the floor of the People’s House and invoke the words of the 20th century’s most despicable tyrant.

Wow! How do you process that one?

Mo Brooks, an Alabama Republican, sought to defend Donald Trump against Democrats’ attacks on him over the course of special counsel Robert Mueller’s probe into The Russia Thing. By now you know how that turned out: Mueller found no credible evidence of collusion between Trump’s campaign and Russian goons who attacked our electoral system.

Why in the name of ethnic genocide does Brooks choose to reference passages to “Mein Kampf,” written in 1925 by the future chancellor of Germany, Adolf Hitler? Brooks cited a passage that Hitler used to talk about “the big lie,” which was a screed that sought to foment his upcoming campaign to launch the Holocaust against Jews. Brooks sought to label Hitler and the Nazis as “socialists.” They were not. The National Socialist Party of Germany was a fascist organization bent on world conquest.

And think for a moment about the juxtaposition of where he did and who he was quoting.

It was in that very chamber where President Franklin Delano Roosevelt asked Congress to declare a “state of war” between the United States and Japan after the “dastardly attack” that had occurred the prior day, Dec. 7, 1941, “a date which will live in infamy.”

The next day, Germany declared war on the United States. The fight was on and the rest, as they say, was history.

And so Rep. Brooks chose to defend the current president of the United States with rhetoric penned by the monster who sought to eradicate Jews from Europe? He sought to conquer the world. He said the Third Reich would last a thousand years; he missed his goal by 988 years.

That a member of Congress would quote from such a monster on the floor of the nation’s Congress is a shameful act.