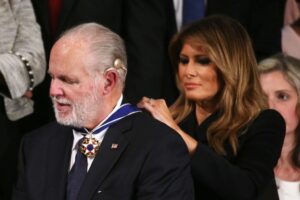 My smart phone news feed chirped at me this morning as I was returning home from a newspaper assignment in Farmersville. I took just a moment to see what was there: Rush Limbaugh has died of cancer at age 70.

I’ve been thinking ever since about what I ought to say about that. I will spare the invective I have used to comment previously about Limbaugh to offer only this.

Donald Trump called him a “legend.” Well … he isn’t.

Limbaugh earned his chops as a right-wing radio commentator/talk show host. He had the dubious distinction of telling falsehoods over the air, such as fomenting the lie about former President Obama’s place of birth and questioning whether he was constitutionally qualified to run for president of the United States.

He told enough lies, then, to be awarded the Presidential Medal of Freedom by Donald Trump. By then, though, he was stricken with the cancer that would kill and, so, Trump rewarded him for saying nice things about the president.

Limbaugh’s impact on the American body politic is unmistakable. He did not advance the cause of civil discourse or understanding of complicated issues of the day.

I won’t miss him.

There. It took quite a bit for me to mostly forgo the epithets I used to toss at him, which is far better than he ever gave to those with whom he disagreed.

Well now … just how divided is the United States of America?

It’s pretty damn divided, based on the performance that took place in the House of Representatives chamber full of lawmakers, about half of whom want the nation’s current president removed from office.

There he was, Donald John Trump during his State of the Union speech, awarding the Presidential Medal of Freedom to a highly controversial radio talker, Rush Limbaugh — who I have acknowledged is battling an advanced form of lung cancer. I stand by my good wishes in his fight against the disease. However, watching the first lady hang the medal around Limbaugh’s neck made me cringe.

He has spewed hate speech for as long as I can remember. He has done not a single thing to earn the nation’s highest civilian honor. There he was, though, soaking up the love from the side of the House chamber that endorses his fiery rhetoric.

And then there was Speaker Nancy Pelosi, the leader of the House impeachment movement against Trump, tearing up the text of Trump’s speech in a dramatic show of petulance at the end of POTUS’s remarks.

Mme. Speaker, you did not need to do that in such a dramatic display. Yes, we all get that she is angry at Trump, but these public demonstrations lend nothing to the effort we all should seek to heal this country’s deep — and I hope not mortal — political wounds.

Trump fed his political base a healthy dose of the red meat it craves. He blasted the criminals who enter the country illegally without ever mentioning all the undocumented immigrants who have contributed to our nation while living in fear of deportation. He stood strong for the Second Amendment. He blasted socialism as a failed ideology.

And, of course, he took the expected digs at the “previous administration,” continuing his ongoing campaign to denigrate the work of President Obama and his team, who rescued the nation from its economic free-fall when they took office in 2009.

Donald John Trump has shown us once again that he intends to keep seeking to divide us. I wasn’t proud of what I witnessed.