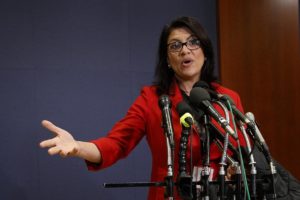 Wouldn’t you know it? A rookie member of the U.S. House of Representatives blurts out a profane declaration, about how House Democrats are going to “impeach the mother***er” and fellow Democrats start expressing their anger at this upstart.

Rep. Rashida Tlaib of Michigan has made her mark immediately. It’s not a pretty mark. She was seeking to fire up a crowd of progressive activists when she offered the foul-mouthed pledge to impeach Donald J. Trump.

Other Democrats are upset that Tlaib has overturned their efforts to orchestrate an orderly transition to power in the House, now that they are in the majority. They don’t want to rush into what might turn out to be a foolish act if they seek impeachment before knowing all the facts related to the myriad issues at hand.

Special counsel Robert Mueller is expected to file his report soon on his probe into “The Russia Thing.” Loudmouths like Tlaib are getting way ahead of themselves.

House Speaker Nancy Pelosi — who calls impeachment a “last resort” — might need to escort the young freshman lawmaker to the proverbial “woodshed” for a woman-to-woman chat about how things get done in the People’s House. She ought to rethink her hands-off approach to Democratic caucus members’ fiery rhetoric.

It reminds of a time many years ago when a whipper-snapper U.S. senator named Rick Santorum sought to challenge one of the Senate’s elders about legislating.

The late Sen. Mark Hatfield, an Oregon Republican, chaired the Senate Appropriations Committee. He decided to vote against a defense bill to pay for a new nuclear-powered submarine, the USS Corpus Christi. Why the objection? Hatfield was a deeply religious man and he didn’t like the idea of a weapon of war carrying a name that translated from the Latin means “Body of Christ.” Santorum, a newly elected Republican from Pennsylvania, raised a stink about it and sought to have Hatfield removed from his key committee chairmanship.

One of the GOP Senate elders, Bob Dole of Kansas, took Santorum aside and said, in effect, “Young man, don’t even think about challenging Mark Hatfield.”

There ought to be a similar scolding in Rep. Tlaib’s future as well.