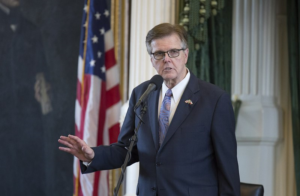 Texas Lt. Gov. Dan Patrick got his underwear tied up in knots when Dallas Mavericks owner Mark Cuban announced he wouldn’t allow the playing of the national anthem before NBA games at the American Airlines Center.

Then the NBA intervened and declared that, oh yes you will, Mr. Cuban, play the anthem, because it’s league policy that we hear “The Star Spangled Banner” before pro basketball games.

Patrick, though, was so angry he announced he would push for “The Star Spangled Banner Protection Act” in the Texas Senate, over which he presides.

The act is quite fascinating. The Texas Tribune reports about the bill: It hasn’t been filed yet, but it would require the playing of the anthem at all events that receive public funding. Presumably, that would include sessions of the House and Senate, which start with prayers, and pledges to the U.S. and Texas flags, but no anthem.

Analysis: A Star-Spangled culture war in Texas | The Texas Tribune

Let’s play this out. Do we play the anthem before we commence, oh, city council or school board meetings, or before counties’ commissioners courts meeting? They’re all open to the public. They receive public money, too.

I have the pleasure of attending Farmersville City Council and school board of trustees meetings as a freelance reporter for the Farmersville Times. I do not believe we are going to sing the anthem before the governing bodies start their meetings.

This, I submit, is a typical example of government overreaction that offers a so-called solution to an alleged problem. 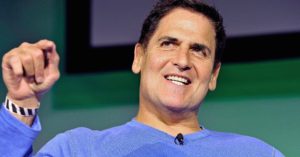 Dallas Mavericks owner Mark Cuban has backed away from his plan to forgo the playing the “Star Spangled Banner” at Mavericks home games at the American Airlines Center.

Huh? Hey, it’s OK with me. So, too, was his prior decision to skip playing the National Anthem.

But now the NBA has restated its pro basketball league policy that involves playing the Anthem. As The Associated Press reported:

The league’s initial reaction to Cuban’s decision was to say teams were free to conduct pregame activities as they wished with the unusual circumstances created by the coronavirus pandemic. Most teams don’t have fans at home games.

But the NBA abruptly reversed course with Cuban’s decision reverberating around the country, including a question put to White House press secretary Jen Psaki during her daily briefing. Athlete protests of social and racial injustice during the “The Star-Spangled Banner” became a flashpoint between then-President Donald Trump and various leagues during his administration.

“With NBA teams now in the process of welcoming fans back into their arenas, all teams will play the national anthem in keeping with longstanding league policy,” the league said.

Are we clear on that? My hope now is that Texas Lt. Gov. Dan Patrick, whose shorts got all twisted up because of Cuban’s decision to skip the Anthem, can concentrate now on legitimate legislative business, rather than pushing the Texas Senate — over which he presides — to pass a Star Spangled Banner bill that makes playing the Anthem mandatory at all sporting events in Texas. 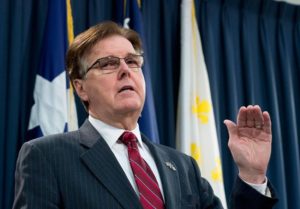 Maybe I should have seen this coming.

Texas Lt. Gov. Dan Patrick has declared a form of political “war” against Dallas Mavericks owner Mark Cuban. You need to know why. He is angry that Cuban no longer allows the National Anthem to be played before NBA games at the American Airlines Center in Dallas.

Patrick won’t have it. He wants to make playing the Anthem mandatory at all sporting events.

I’m tellin’ ya, the measures some folks take to insert government into matters where it really doesn’t belong. This appears to be one of those matters.

“It is hard to believe this could happen in Texas, but Mark Cuban’s actions of yesterday made it clear that we must specify that in Texas we play the national anthem before all major events,” Patrick said in a statement. “In this time when so many things divide us, sports are one thing that bring us together — right, left, black, white and brown. This legislation already enjoys broad support. I am certain it will pass, and the Star Spangled Banner will not be threatened in the Lone Star State again.”

I’ve already stated my tepid view on this matter. It remains so.

Cuban doesn’t want the Mavs to be inserted into political statements, such as when players “take a knee” during the Anthem to protest police brutality chiefly against African-American citizens. Given that the NBA comprises an overwhelmingly African-American roster of athletes, this form of peaceful protest has become standard among players.

Now we have the Legislature getting involved?

Give me a break. Please.

Patrick tweeted this: “Sell the franchise & some Texas Patriots will buy it. We ARE the land of free & the home of the brave.”

The land “of free”? Yes, we are. We are free to run our businesses as we see fit. Which is what Mark Cuban is doing. He isn’t making a choice I would make, but he’s the owner of the team. The lieutenant governor ought to butt out. 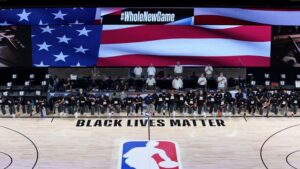 This is an item that likely shouldn’t give me much of a reason to get upset, but in a strange way it does bother me.

Mark Cuban, the flamboyant and mouthy owner of the NBA’s Dallas Mavericks, has decided to no longer allow the National Anthem to be played at the start of Mavericks games at the American Airlines Center in downtown Dallas.

I guess Cuban is tired of fighting the ongoing battle over whether athletes should be allowed to “take a knee” to protest police brutality — chiefly against people of color — in cities across the nation. The NBA has issued statements in support of players’ actions when the Anthem gets played.

Perhaps the decision by the Mavs’ owner to no longer allow the Anthem to be played and sung at the AA Center is his way of cutting his losses, or seeking a path of lesser resistance.

Make no mistake about this: I am highly unlikely to attend a Mavs game any time soon. It’s too expensive for little ol’ fixed-income, retired me. Plus, I live about 30 miles north of the arena and parking downtown can be a hassle; I’m too old for that kind of grief, you know?

However, I do enjoy the sound of the Anthem at sporting events. It’s a bit of Americana played out in real time.

Am I nuts about the athletes’ protests, their “taking a knee” while the Anthem is played? Not really. It’s not the way I would express my displeasure over government policy. However, I respect that form of protest as a peaceful expression of disagreement. Thus, I am conflicted somewhat by the entire matter.

It’s Mark Cuban’s team. He has all the money he can ever spend and his face can be seen all over the place, given his role on a broadcast network TV reality show and his penchant for making a spectacle of himself.

Cuban’s decision to ban the National Anthem at Mavericks games irks me … but I’ll get over it.

Is that a big deal? Apparently so.

Cuban happens to detest Trump. The feeling is mutual. Cuban is backing Clinton. Cuban is a successful businessman. He owns the Dallas Mavericks pro basketball team, which happens to make a lot of money for the in-your-face, brash, loudmouthed owner.

What was Trump’s response? He reportedly considered inviting Gennifer Flowers. You remember her, right? She had an affair with Bill Clinton before Clinton became president in 1993.

Now we hear that Flowers isn’t coming to the joint appearance Monday night after all.

Oh, but Cuban will be there. Apparently his task — such as it is — will be to get under Trump’s skin just by being there on the front row, in plain sight for Trump to see.

But you know, there’s a part of me that wishes Flowers would attend this event. I almost can hear Trump make some catty reference to the former president’s misbehavior, which would give Hillary Clinton an opening to say something like:

“Perhaps I need to remind you that my husband and I worked out our difficulties and have remained in the same marriage — to each other — that we began more than 40 years ago. We still love each other very much.

“Now, tell us about your marital record, Donald.”

Mark Cuban, the owner of the Dallas Mavericks pro basketball team, can be labeled many ways.

He is brash, loud, at times brusque, occasionally inarticulate.

He is not a racist.

Thus, he is getting hammered unfairly over some remarks he made recently in the wake of the Donald Sterling brouhaha over whether Sterling uttered racist remarks in that recorded phone conversation with his gold-digging girlfriend/aide/pal V. Stiviano. Sterling did show his racist colors and the Los Angeles Clippers owner has been banned from pro basketball for the rest of his life.

Cuban popped off this week about what he’d do if he saw a young African-American male wearing a hoodie and droopy pants. He said he’d walk to other side of the street. Cuban also said he’d precisely the same thing if he saw a tattoo-marked, white kid with a shaved head and pierced jewelry stuck in his ears, nose, lips and eyebrows.

Does any of that make Cuban a racist? No.

I’m not the first to acknowledge this in print — although the thought occurred to me the moment I heard about the controversy over Cuban’s remarks — but the Rev. Jesse Jackson said virtually the same thing some years ago.

He was speaking a blunt truth about human beings. “While we all have our prejudices and bigotries, we have to learn that it’s an issue that we have to control … not just kick the problem down the road,” Cuban said.

Mark Cuban is not in the same league as Donald Sterling as it relates to racism.