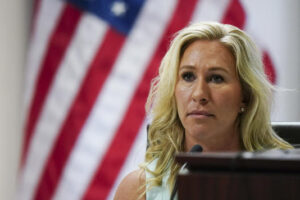 Marjorie Taylor Greene, the moron who represents Georgia’s 14th District in Congress, wants fellow Republicans to show “pity” for those who attacked our government on Jan. 6.

Pity? Yes! She believes the treasonous mob that sought to “Hang Mike Pence!” and capture and possibly execute House Speaker Nancy Pelosi are being treated unfairly by the government that is seeking justice against the mob that sought to overturn the results of the 2020 presidential election.

Let that sink in for just a moment.

Greene is a member of the party that is about to take control of the House after the midterm election. She already had been stripped of committee assignments over her idiotic statements regarding the Holocaust. She now is trying to weasel her way back into the good graces of GOP leadership … by seeking “pity” for the traitors who stormed Capitol Hill on 1/6.

This individual is a disgrace to the government she abhors. 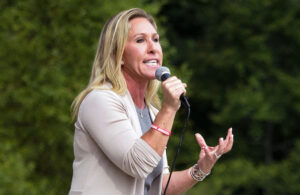 “I am not going to mince words with you all. Democrats want Republicans dead and they have already started the killings.”

This comment has been attributed to U.S. Rep. Marjorie Taylor Greene, R-Loony Bin, aka Rep. What’s Her Name.

I am not going to parse this bit of idiocy, but idiots need not get any more attention than they deserve. In her case, that means none.

Well, OK. The fact that I have mentioned her briefly means she’s getting a little bit of attention. Just know that were I to spend time commenting on all the stupidity that flows from What’s Her Name’s mouth, I would have time for nothing else.

Regular readers of this blog might remember when I took a then-rookie member of Congress to task for being so damn out front on every issue imaginable. She is a progressive Democrat from New York City: Alexandria Ocasio Cortez.

She was, well, everywhere. At once! She seemed to defy the laws of physics. She even became known as AOC and became the most visible member of a progressive team of congresswomen known as The Squad.

OK, she’s now in her second term, along with other members of The Squad.

She has given way to another brand of congressional newcomer. This latest batch comes from the other end of the spectrum. These are the right-wingers, adherents to that thing called QAnon.

President Biden recently referred to one of the leaders of the Class of 2020 gang of loudmouths as “What’s Her Name.” The representative from the 14th Congressional District of Georgia just couldn’t stand that kind of put-down. Hey, I thought it was so good, I am going to adopt as my own rule of referencing her in this blog.

From now until I decide otherwise, I’ll refer to this idiot as What’s Her Name. You’ll likely know to whom I am referring.

I guess in a way, Rep. What’s Her Name took a page from AOCS’s playbook two years earlier. Something comes up that gets the media’s attention? Rep. What’s Her Name shows up in front of a bank of microphones. She then spews whatever nonsense she can find. Reporters scribble their notes furiously. She gets all the attention in the world … none of which, I believe, she deserves.

There used to be an unwritten rule that suggested that House members or senators needed at least a term, or two, to earn any attention.

Hah! That rule, just like so many others, has been flushed away. 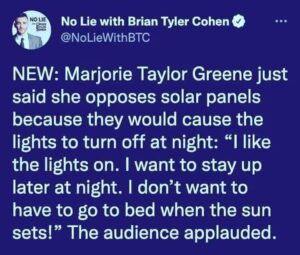 The quotation you see with this very brief blog post comes from the House of Reps’ QAnon queen herself, Marjorie Taylor Greene of the 14th Congressional District of Georgia.

I don’t know quite how to respond to this comment. I have been advised by those on social media that it’s the real thing. It ain’t made up. She actually said this.

Just think that his nitwit is actually voting on federal laws that we all have to obey. Just read the attached message and ask yourself: Did the people of this congressional district really buy into this when they put her into office?

Marjorie Taylor Greene just cannot stomach the thought of President Biden taking credit for a mission he ordered that killed the leader of al-Qaeda, Ayman al-Zawahiri.

She said it is “absurd” that Biden would take a “victory lap” to announce the killer’s death from a drone strike in Kabul, Afghanistan.

What do we think about the QAnon queen of the House — a rookie legislator at that! — spouting off about the president? I don’t think much of anything, other than to spend a minute or two to suggest on this blog that Rep. Greene, a Georgia Republican, is, um, out of her fu**ing mind! The 14th Amendment to the U.S. Constitution says this in Section 3 of that amendment; it provides a vivid explanation of who can serve in Congress.

It states: No person shall be a Senator or Representative in Congress, or elector of President and Vice-President, or hold any office, civil or military, under the United States, or under any State, who, having previously taken an oath, as a member of Congress, or as an officer of the United States, or as a member of any State legislature, or as an executive or judicial officer of any State, to support the Constitution of the United States, shall have engaged in insurrection or rebellion against the same, or given aid or comfort to the enemies thereof. But Congress may by a vote of two-thirds of each House, remove such disability.

A member of Congress, Rep. Marjorie Taylor Greene, a Georgia Republican, is being challenged by those who believe she engaged in an insurrection on 1/6. That she helped incite the crowd to storm the Capitol Building that day.

If she is found culpable, her congressional career could end.

OK, recognizing my own bias, I believe she did what she is accused of doing and that she should be denied the chance to seek re-election from the 14th Congressional District of Georgia.

The QAnon-believing, Stop the Steal, Big Lie believer has been nothing but a pain in ass since she took her seat in Congress in early 2021.

But … let’s allow this evidentiary hearing process to play out.

Eight Republicans stood in the way of legislation passing through the U.S. House of Representatives unanimously and, thus, sending another clear message of strength against the Russian invasion of Ukraine.

A bill that would have revoked U.S.-Russia normal trade relations sailed through the House on a clear and decisive bipartisan vote. Except for the eight GOP nimrods who opposed it.

I don’t know who all of them are, but I surely do recognize several of the dipsh**s over their past behavior and idiotic blathering.

GOP Reps. Chip Roy of Texas, Lauren Boebert of Colorado, Marjorie Taylor Greene of Georgia, Matt Gaetz of Florida, Thomas Massie of Kentucky all are familiar (more or less) to me. The others are Andy Biggs of Arizona, Dan Bishop of North Carolina and Glen Grothman of Wisconsin.

The first five of are your standard, run-of-the-mill GOP nut jobs. Greene, Boebert and Gaetz perhaps are the most well-known. Gaetz, let’s recall, might be indicted soon on a sex-trafficking charge. Boebert and Greene are the twin QAnon queens of the House. Roy is just, well, a Texas Republican … so that’s all I need to say about him. Massie is another fruitcake.

What is so bizarre is that these eight GOP outliers stand in stark contrast to what I consider to be traditional Republican antagonism to anything dealing with Russia or its immediate predecessor, the Soviet Union.

They all seem to parrot the thinly veiled praise of Russian thug Vladimir Putin that comes from The Donald, who remains their hero despite his insistence on pushing The Big Lie forward about the 2020 presidential election and the non-existent “widespread vote fraud.”

Oh, well. I’ll just go on now and take care of the rest of the day’s activities that await me. I just had to get this little annoyance off my chest.

As much as I had hoped there wouldn’t be a display of disrespect of the president during his State of the Union speech, my hope was dashed about two-thirds of the way through President Biden’s speech to a joint congressional session Tuesday night.

Rep. Lauren Boebert demonstrated the lowest of the low points of where the modern GOP has sunk in recent years.

The president was speaking about his late son’s exposure to dangerous chemicals while serving in the Army during the Iraq War and was about to speculate as to whether Major Beau Biden’s exposure brought on the cancer that killed him; then Boebert — along with her QAnon colleague Marjorie Taylor Greene — decided to yell an epithet from the chamber. Boebert said something about Joe Biden being responsible for the deaths of 13 service personnel during the U.S. troop withdrawal from Afghanistan.

That moment surely will go down in infamy. Boebert’s outburst drew boos even from her fellow Republican lawmakers.

She disgraced the office she occupies, disrespected the president and the commander in chief and showed the entire world that she lacks the class, grace and decorum to vote on laws that affect every single American.

I always have believed we are better than to send morons to Congress such as Lauren Boebert. I was wrong. I am not a constituent of hers, given that I do not live in the congressional district she was elected to represent. I am, however, a proud American patriot who obeys the laws on which she votes, which gives me standing to declare that I despise Lauren Boebert and everything she believes.

I have no qualms — not a single one — about the First Amendment and the guarantee of free speech it enshrines.

But, dang! Why don’t the right-wing lunatics out there cease delivering the “fake news” and the “disinformation” about current issues of the day, not to mention about our efforts to end a killer virus that keeps sickening Americans.

Congresswoman Marjorie Taylor-Greene — a Georgia Republican QAnon queen — went on a podcast and said the Declaration of Independence instructs us to “overthrow tyrants.” Which she said was the intent of the 1/6 insurrection.

She is entitled to spew that trash. I just wish we could police such nonsense and send it immediately to the trash heap, where it belongs.

I never would consider watering down the First Amendment or any of our Bill of Rights provisions (yes, that includes the Second Amendment, which allows us to “keep and bear arms”).

I just want society to dismiss the crap that flies out of the mouths of loons such as Rep. Taylor-Greene.