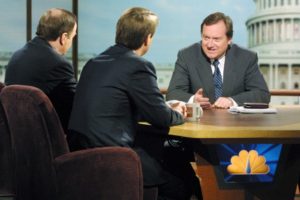 Do I still miss him? You bet I do.

So does Chris Cillizza, a columnist for the Washington Post, who reposted a piece he wrote three years ago to commemorate the fifth anniversary of Russert’s sudden and shocking death from a heart attack.

I think I know the answer.

He’d be appalled at both things.

Russert came from the political world into the world of broadcast journalism. He worked for U.S. Sen. Daniel Patrick Moynihan, who during his years in the Senate was many Republicans’ favorite Democrat. He also worked for New York Gov. Mario Cuomo, who didn’t have as many friends in the GOP. But still, Russert knew his way around politicians.

He joined NBC News and stumbled onto the “Meet the Press” moderator gig while filling in one Sunday.

He did so well, proved to be so comfortable, that the NBC News brass made him the permanent moderator.

What set Russert apart from so many of his peers and those who came along after him was his preparation. He knew all there was to know about the people who sat in front of him. Russert was an expert at making politicians account for the very things they said in public.

“You said this, senator,” he would say, “How do you explain that?”

He was an equal-opportunity afflicter. Democrats and Republicans all had to bring their “A game” to a session on “Meet the Press” when facing Tim Russert.

What would he think of Trump? He’d no doubt be aghast, but he’d keep it to himself. One can rest assured, too, that he’d give Hillary Rodham Clinton just as stern a grilling.

Brian Williams fibs about being shot down during the Iraq War and he gets suspended by NBC News.

Bill O’Reilly fibs about “covering” the Falklands War while reporting from a safe distance … but he’s still on the job at Fox.

Now it’s George Stephanopoulos giving 75 grand to the Clinton Foundation and then failing to report it to his employers or to his ABC News viewers.

ABC calls it an honest mistake. It’s standing by the “Good Morning America” co-host and moderator of “This Week.”

It’s been known for 20 years that Stephanopoulos was an avid supporter of Bill and Hillary Clinton. He worked in the Clinton White House as a senior political adviser. Then he made the switch to broadcast journalism and by most accounts — yes, some conservatives haven’t been so charitable — he’s done a credible job.

Why did he give to the Clinton Foundation — with one of its principals, Hillary Clinton, running for president? He said he’s deeply interested in two issues the foundation supports: the fight against deforestation and HIV/AIDS.

OK, fine. Has he not heard of, say, Greenpeace and the Bill and Melinda Gates Foundation who fund efforts to fight those very causes? If he was interested more in the causes and less in the people who champion them, then he could have given to any number of reputable foundations to carry on those battles.

He didn’t. Now his reputation as a journalist has been called into serious — and legitimate — question.

Stephanopoulos isn’t the first political hired hand to make the transition to TV news. Diane Sawyer once wrote speeches for President Nixon and the late Tim Russert once was a key aide to New York Gov. Mario Cuomo. They made the switch. Others have gone into political commentary after working for partisan pols — or themselves been politicians — on both sides of the aisle.

None of them, though, gave large sums of money to overtly political foundations while working as journalists or pundits or commentators.

George Stephanopoulos has created a huge mess for himself — and for his colleagues.

A progressive voice is gone. Too bad for the nation he leaves behind.

Former New York Gov. Mario Cuomo — who died Thursday at age 82 — once was thought to be a possible candidate for president. Why, he even might have become president one day, perhaps a good or great president at that.

He chose instead to stay in Albany, N.Y., and govern his state. Cuomo would lose his governor’s job eventually in that 1994 Republican sweep, the one that took control of Congress and tossed out a number of governors. Cuomo was gone from public office, as was, say, his friend and colleague Ann Richards here in Texas.

But take a listen to a speech this good man delivered a decade earlier, at the Democratic National Convention in San Francisco. He told of a “tale of two cities.” One was the “shining city on the hill” envisioned by President Reagan. But there was another city that Gov. Cuomo sought to lift up.

He sought to bring attention to the suffering he said the president was dismissing.

Cuomo’s brand of progressiveness wasn’t the knee-jerk brand. He spoke from his heart. No, his politics didn’t play well in much of the country in 1984. Was his progressive brand popular here, in Texas — and in this part of the Lone Star State? Not even close.

As he told the DNC delegates in San Francisco that evening, he wanted the nation to know that while, yes, the nation did symbolize the shining city, it was — and is — a more complex place. People who are suffering need help from the government.

After all, he said, it is their government, too.