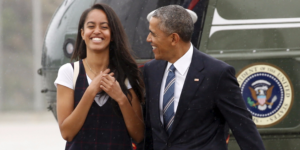 Who would have thought that Ivanka Trump and Chelsea Clinton would be singing off the same hymnbook page?

And to think the object of their shared melody would be Malia Obama.

Ivanka tweeted this message: “Malia Obama should be allowed the same privacy as her school aged peers. She is a young adult and private citizen, and should be OFF limits.”

There you go. That comes from the daughter — and senior adviser — of the president of the United States.

Then came this from Chelsea Clinton, daughter of another former president and a would-be president who lost the 2016 election to Ivanka’s father: “Malia Obama’s private life, as a young woman, a college student, a private citizen, should not be your clickbait. Be better.”

Some paparazzi had snapped some pictures of Malia Obama smooching with a Harvard student and — gasp! — smoking a cigarette. The photos went viral, prompting the two presidents’ daughters to come to Malia’s defense.

Indeed, they both understand how the media can pry into people’s private lives, given their own parents’ high profile. Chelsea Clinton even weighed in when some in the media criticized 11-year-old Barron Trump’s wardrobe choices at a public event. Chelsea wrote at the time: “It’s high time the media & everyone leave Barron Trump alone & let him have the private childhood he deserves.” 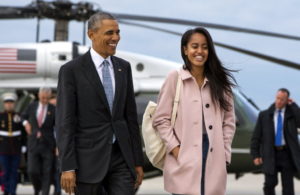 Leona Allen has written a terrific blog post for the Dallas Morning News.

Sadly, though, it won’t accomplish what she has demanded: an end to the racist epithets aimed at the family of Barack and Michelle Obama.

Allen has taken appropriate note of the hateful reaction from those who commented on Malia Obama — the older of the Obamas’ two daughters — deciding to take a year off before entering Harvard University. She writes: “Instead of celebrating the kid’s hard work, anonymous trolls took it upon themselves to disparage her with racist epithets.”

Fox News took down the comments after its website was filled with comments from the racist haters who took time to disparage Malia’s accomplishment.

The president’s policies are open to criticism, as are the policies of all presidents. It goes with the territory. They all know their public policy record is fair game.

What is not fair game, though, is the hate that is thrown at public officials — and their families.

We’ve seen far more than enough of it for the past nearly eight years. As Allen notes, the Obamas have done an admirable job of maintaining their dignity in public in the face of the comments that have been hurled at them.

If only the blogger’s demand to cease and desist the hatred would be met.

Of course, the Obamas are the only targets of the hatred. The blog notes that others have taken aim at interracial couples. Allen noted that U.S. Sen. John McCain’s son, Jack, is married to an African-American woman and has lashed out at the haters simply by posting pictures of himself and his wife on social media.

We’ve all heard about the “toxic” political atmosphere in Washington.

Many of us salute the progress we’ve made in the realm of race relations.

This latest spasm of hatred aimed at an accomplished young woman who happens to be the daughter of the president of the United States only shows us how far we have to go.

Elizabeth Lauten’s dimwitted Facebook post about Sasha and Malia Obama — and a blog I posted on the subject — brought a fascinating response from a dear friend and former colleague.

My friend Sheila noted that “first children” have been unfair targets for decades. She took note going all the way back to Lyndon and Lady Bird Johnson’s daughters, Lynda Bird and Luci Baines.

Lauten, a staffer for a Republican member of Congress, Stephen Fincher of Tennessee, jabbed at the Obama girls because in her mind they didn’t give the ceremonial pardoning of the Thanksgiving turkeys the respect the event deserved — and you can make that determination for yourself, I reckon.

But my friend’s remark brings to mind another interesting point.

Of all the presidential kids she cited, she mentioned only one male: Ron Reagan. The rest of them are all females.

The twin daughters of George and Laura Bush got battered over some nightclubbing incident; Chelsea Clinton was the on the receiving end of unflattering comments for many years during her dad’s two terms as president; Ronald Reagan’s youngest child, daughter Patti, was criticized because of her near-estrangement — for political reasons — from her parents; Amy Carter received the same kind of unfair media treatment that befell Chelsea Clinton; Tricia and Julie Nixon were scrutinized constantly by the media during their time in the White House.

Who’s missing from this lineup? The children of Gerald and Betty Ford and those of George and Barbara Bush. Except for Susan Ford, the rest of the family all had left the nest; as for the equally sizable Bush brood, they all were grown and gone.

The media and others in public life often don’t distinguish themselves under certain circumstances. The manner in which they treat the children of presidents and their spouses is one of those instances in which everyone ought to take a hard look inward.

Maybe they can ask: Is this how they would want their daughters to be treated?

Elizabeth Lauten is on the staff of a Republican member of Congress.

She’s apologized apparently for a ghastly message she posted on Facebook. The reaction to it initially, though, was ferocious — and deserving.

Lauten’s targets were — get ready for it — the daughters of President and Mrs. Obama. Malia and Sasha Obama came under fire from Lauten because they were, um, acting like teenagers at a public event.

Dad made a joke; the girls rolled their eyes. They apparently made some faces that signaled boredom. Then Lauten took aim at the clothing the girls wore, suggesting they were more fitting for a bar than for a White House event, which incidentally was the traditional presidential pardoning of Thanksgiving turkeys.

Of course, Lauten just couldn’t resist taking a shot at the first couple. She wrote: “Dear Sasha and Malia, I get that you’re both in those awful teen years, but you’re part of the First Family, try showing a little class. At least respect the part that you play. Then again your mother and father don’t respect their positions very much, or the nation for that matter, so I’m guessing you’re coming up a little short in the ‘good role model’ department.”

Lauten’s boss, U.S. Rep. Stephen Fincher, R-Tenn., hasn’t commented publicly on what his staffer wrote in the open letter. He needs to scold the dickens out of Elizabeth Lauten for taking pot shots at two teenage girls.

If anyone demonstrated a lack of class — which she has acknowledged in her apology — it was Lauten.