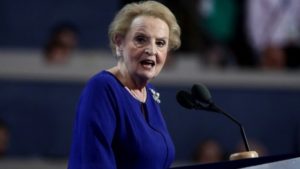 Donald J. Trump seems to have a fascination with ham-fisted dictators. He relishes praise that comes from the likes of Russia’s Vladimir Putin and says he’d be “honored” to meet with North Korea’s Kim Jong Un “under the right circumstances.”

Let’s set aside the Putin “bromance.” Kim Jong Un doesn’t deserve the attention of the president of the United States.

Former Secretary of State Madeleine Albright has counseled the president to avoid any temptation to sit across a negotiating table with Kim Jong Un. I believe Albright is correct.

North Koreans are starving while Kim Jong Un is squandering resources to build his military machine. Albright said it is wrong in the extreme for the U.S. president to talk to this guy, who’s also threatening potential nuclear attacks on South Korea and possibly Japan.

Trump already has referred to Kim as a “smart cookie,” which isn’t exactly the kind of description a president would apply to the leader of a nation that is still technically at war with his neighbor to the south; North and South Korea, you see, never agreed to a peace treaty when the shooting stopped during the Korean War, a conflict that cost more than 40,000 U.S. lives.

As for the “honor” the president would feel if he could meet with Kim under the correct circumstance … don’t go there, Mr. President.

Trump has boasted about his ability to make “great deals” as he seeks to meld his business acumen with his conduct of foreign and domestic public policy. Thus, Trump reckons that he can talk Kim Jong Un into a more reasonable posture in East Asia.

The president’s record of non-achievement — just a little more than 100 days into his presidency — suggests to me that he needs to rethink that particular talking point.

We’re all entitled to having second thoughts, aren’t we?

I put a tweet out there a few days ago in response to Sen. John McCain’s angry comment at protesters who were holding up signs while several former secretaries of state were testifying before McCain’s Senate Armed Services Committee.

He called them “low-life scum.” I said they were entitled to protest.

Well, McCain’s anger was justified in one important sense.

One of the former diplomats they were accosting in the hearing room was 91-year-old Henry Kissinger, who served Presidents Nixon and Ford and was awarded the Nobel Peace Prize for negotiating an end to the Vietnam War. Also testifying with Kissinger were Madeleine Albright and Condoleezza Rice.

Yes, the demonstrators had a right to protest. They should have demonstrated at least a bit of decorum and kept their distance from Kissinger, Rice and Albright. Kissinger in particular was actually threatened physically by the demonstrators, who were carrying signs that declared Kissinger to be a “war criminal.”

McCain made no apologies for his outburst. In retrospect, I wouldn’t have apologized, either.

“Of course, I was outraged, and I’m still outraged. It’s one thing to stand up and protest. It’s another to physically threaten an individual,” Chairman McCain said.

You were right to be angry, Mr. Chairman.