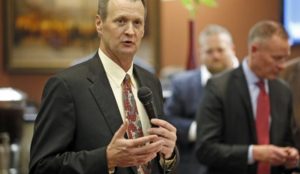 Jarrett Atkinson was, in effect, shown the door at Amarillo City Hall when voters elected a new majority to their City Council in 2015.

The city manager had done a good job for Amarillo during his six years at the helm. The new council majority saw things differently. Atkinson gave it a shot — for a brief period of time — before he submitted his resignation.

He said all the right things upon his departure. He didn’t make waves. He didn’t burn bridges publicly.

Atkinson took some time off and then ventured two hours south along Interstate 27 to become Lubbock’s city manager, where, according to an article in the Amarillo Globe-News, he has had a productive and eventful first year at that city’s administrative wheel.

It gladdens my heart to know that Atkinson has remained in public service.

It is true that I’ve lost touch with him since he left Amarillo City Hall; in truth I lost touch when I left the Amarillo Globe-News in August 2012. But I remained a strong supporter of the city manager, even as he struggled under the City Council’s new majority, which lasted two years before voters decided to clean them all out and installed an entirely new council in the spring of 2017.

I admired Atkinson’s expertise on water management. He took Amarillo many steps forward in its acquisition of water rights, helping secure the city’s future development. Atkinson was the Panhandle Regional Planning Commission’s go-to guy on water management before he made the move to Amarillo City Hall.

Moreover, I trust he’ll bring that same expertise to his new gig in Lubbock.

While it is true that Atkinson was universally loved and admired by the staff at Amarillo City Hall, I continue to look at the progress the city made during his time as city manager.

Downtown Amarillo took many steps forward on his watch. The city continued its moderate and steady growth. The city’s overall economic health remains strong, built largely on the municipal administration that Atkinson led.

I will continue to wish Jarrett Atkinson well as he continues his public service career. Lubbock has gained a solid hand at the municipal wheel.