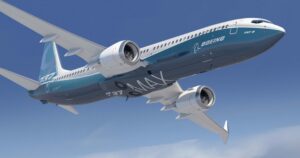 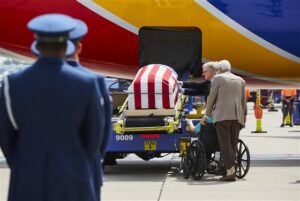 It wasn’t the way he ever would have wanted. But he’s home. Finally. Fifty-two years after dying in battle during the Vietnam War.

But that’s only part of this drama.

Knight was an Air Force fighter pilot who perished on May 19, 1967, when his jet was shot down during a mission over Laos during the war. His remains were only recovered early this year. Authorities were able to identify through thorough examination of dental records.

But wait. There’s much more.

Knight said goodbye to his young sons at Dallas Love Field as he left to fight in that war. One of those sons, Bryan Knight, grew to become a pilot. He flies today for Southwest Airlines, based at Love Field.

Good heavens. I am getting emotional just writing these few words.

What’s more, Col. Knight’s arrival aboard the plane piloted by his son was announced through the Love Field public address system. When the announcement came through the intercom, employees and passengers stopped what they were doing to watch Col. Wright’s casket being removed from the plane that brought him home.

Knight received full military honors upon his arrival. “Our Southwest Airlines family is honored to support his long-hoped homecoming and join in tribute to Col. Knight as well as every other military hero who has paid the ultimate sacrifice while serving in the armed forces,” the airline said in its statement. 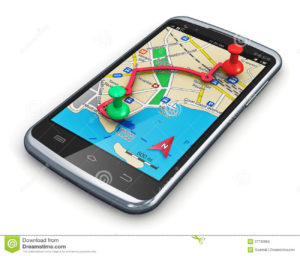 I have an announcement to make, so take your seats and get hold of yourselves.

As of this morning I have embraced fully the value of Internet navigation. I believe I can say I have arrived with both feet into the 21st century.

What prompted this revelation? My wife and I had to drive early today from our residence in Fairview, Texas to Dallas Love Field airport. It took about 40 minutes to drive nearly 30 miles. We had not made that drive — ever!

How did we find our way from Fairview to Love Field? I called up the Google application on my smart phone, punched in “Dallas Love Field” and then hit search. It prompted me to punch the “Get Directions” button. I did. The directions came up and a clearly speaking female-sounding voice guided my wife and me to our destination.

I know what you’re thinking. Big bleeping deal, dude. So what if you’ve finally hooked your wagon to technology that’s been around for years now?

Some years ago, a niece of ours was traveling from California to Washington, D.C. She and her husband were moving from one coast to the other. She was traveling alone in her car and she wanted to stop in Amarillo overnight to see her aunt and me. She called me on the phone. I then offered to e-mail her explicit directions on how to get from Interstate 40 to our home in southwest Amarillo.

Our niece chuckled and said, with just a hint of smugness, “That’s OK. I have my phone. I can find you.”

Now I, too, can be smug if I so choose to be if someone dares offer directions to me. That’s all right, I’ll tell them. I have my phone.

And it’s a hell of a lot smarter than I am.