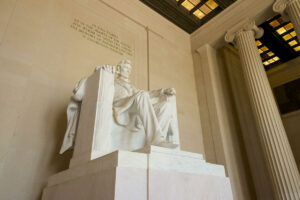 He has embraced a new public opinion that suggests that today’s Republicans rate him a greater president than — get ready for it — Abraham Lincoln.

No, Mr. President, you aren’t. No matter what GOP faithful voters say today, Donald Trump in no way, shape or fashion can be compared favorably to President Lincoln, the man held up as the gold standard for Republican Party policy.

They called it the Party of Lincoln for good reason. He fought to preserve the Union against forces that sought to tear the country apart over slavery. Yes, that battle cost him his life when John Wilkes Booth shot him to death at the end of the Civil War. His fight was the most noble cause imaginable, given the context of the time.

What will the Party of Trump stand for when all is said about it? Let’s try, oh, insult, innuendo, chaos, confusion, betrayal of international allies, cozying up to dictators and, oh yes, impeachment.

That’s all I’ve got on this bit of fantasy.

Except this: I would be willing to wager real American money that they won’t build a memorial on the Washington, D.C. Mall in Donald Trump’s honor. 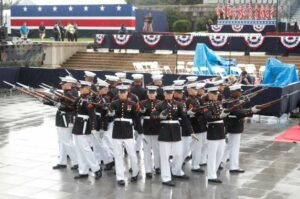 I had been concerned about whether Donald J. Trump would deliver a too-political speech while offering a “salute to America” at the Lincoln Memorial, that he would hijack a traditionally non-partisan celebration and turn it into a re-election campaign event.

To my admitted surprise, he didn’t fall into that trap. He gave what I guess you could call a workmanlike speech that sought to pay tribute to the revolutionaries who (a) created a new nation and (b) fought for it on battlefields along the Atlantic coastal region.

Yes, I know about the reference to our men taking control of the “airports” in, um 1775, which occurred 128 years before Orville and Wilbur Wright launched the first airplane in Kitty Hawk, N.C. Bad speech-writing, bad editing there.

But the president managed to stick mostly to script.

I have promised to offer a good word when Donald Trump earns it. I am doing so here and now. 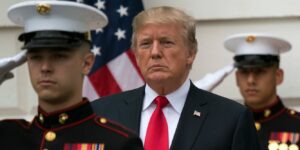 Every Independence Day since, oh, perhaps The Flood, the nation’s capital has conducted a celebration aimed at inviting the public to cheer the birth of the United States of America.

It has been free of politics and, more importantly, of politicians. Spectators listen to music, poetry delivered by celebrities and, of course, fireworks. They cheer and shout and celebrate the nation we all love.

This year? Well, the president of the United States is going to take center stage. He will offer a “Salute to America” speech from the steps of the Lincoln Memorial. What’s more, there will be limited seating reserved only for reserved guests pre-approved by the White House; they will be seated from the Lincoln Memorial to halfway along the Washington Mall. The fireworks launch site has moved from The Mall to the Tidal Basin; vision will be partially obscured.

Perhaps the most unseemly aspect of all this will be the presence of the president. Tradition has kept presidents away because of security concerns. Not this year. Donald Trump was so smitten by a Bastille Day event he witnessed in Paris that he wanted to replicate it here. It’s the opening remarks that hold the greatest potential for this president saying something so totally inappropriate that has many of us cringing at the thought.

Do you think it is at all possible that Donald Trump would turn that opening event into a political campaign speech touting his re-election? Well, I do believe it is possible … if not probable that he would do that very thing.

I am willing to be proven wrong. If he delivers the kind of speech the Lincoln Memorial steps, then I will be glad to offer props for the president. I fear, though, that something quite inappropriate might be in store for us on the day we are supposed to celebrating the nation, not the individual who resides in the White House.

Mount Pleasant, S.C., resident Chris Cox is the living, breathing symbol of selfless service to others.

The government shutdown has resulted in the furloughing of “non-essential” government employees, such as the maintenance crews that keep our national treasures dolled up for us tourists.

He’s been mowing the lawn in front of the Lincoln Memorial for the past several days while our so-called “leaders” are arguing over whether to reopen the government and extend the debt ceiling to enable the nation to keep paying its bills.

Failure to do either of these things will create significant havoc in people’s lives. Economists say defaulting on our national debt obligations could be near-cataclysmic.

To be sure, Cox isn’t your run-of-the-mill do-gooder. He’s a bit rough around the edges. He reportedly has a colorful past. He might not be able to keep cutting the grass while the feds keep much of the government on the shelf.

You have to admire someone who wants to this kind of a statement. Many of the rest of us just sit around and gripe about Congress, the president and others at or near the top of the federal government chain of command.

This fellow took matters into his own hands.

There’s just something uplifting about this story.

Get yourself cleaned up, Mr. Cox, and run for public office.