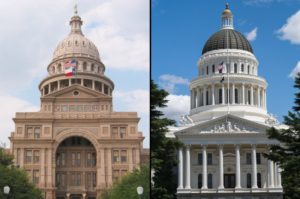 I dislike boycotts, even when they are launched to promote a cause with which I might agree.

Sometimes they give me heartburn. Take the decision by California officials to no longer send state employees to Texas because of the Lone Star State’s recent legislation affecting LGBT residents.

The Texas Legislature recently allowed welfare agencies to deny adoptions for same sex couples based on their religious beliefs. California Attorney General Xavier Becerra declared the law to be discriminatory and as a result, the state no longer will send employees on state-funded trips to Texas.

Yes, the law discriminates. I don’t like it, either. It opens the door for folks to declare religious objections when they faith might not be the actual reason. Is a boycott of Texas the most appropriate response? I tend to doubt it. I am open to discussion about this and would invite comments arguing the point.

My concern is that boycotts tend to inflict gratuitous collateral damage. The people who are hurt by them quite often are business owners or residents of the jurisdiction being boycotted; these individuals might happen to agree with the reason for the boycott, so they are caught in a political vise.

According to the Texas Tribune: “While the California DOJ works to protect the rights of all our people, discriminatory laws in any part of our country send all of us several steps back,” said Xavier Becerra, the California attorney general. “That’s why when California said we would not tolerate discrimination against LGBTQ members of our community, we meant it.”

OK, Mr. Attorney General. I get it. Raise hell about it. Stomp your feet. Pound on your desk. Declare it to be bad law and urge residents of Texas to seek to overturn it. I agree with you!

I just fail to understand how a boycott is going to bring tangible result, other than to inflict damage to private citizens who would benefit from state employees traveling to Texas.

I’ve needled President Obama over the years about his overuse of the first-person singular pronoun.

He did it again today during a ceremony at the White House and I have to call him on it.

He was speaking at an event honoring LGBT citizens when a woman stood up and heckled him about his administration’s deportation policies.

The president scolded the heckler, telling her, “You’re in my house.”

To which I would respond: What do you mean your house? It’s my house; it belongs to the citizens; you and your family are tenants until Jan. 20, 2017. Then you move out. You look for a place to live. You’re on your own, Mr. President.

This illustrates one of the major beefs I have with the president, his willingness to take personal possession of things that don’t belong to him.

I cite the White House as an example.

According to The Hill: “As a general rule, I am just fine with a few hecklers,” Obama said. “But not when I am up in the house. My attitude is if you’re eating the hors d’oeuvres, you know what I’m saying? And drinking the booze? I know that’s right.”

The heckler was out of line to interrupt a public event. The people came there to hear the president of the United States, not some disgruntled individual who dislikes a policy.

Having declared that I’ve never watched “Duck Dynasty,” I now might — let me reiterate might — catch an episode or two now that Duck daddy Phil is back in the game.

A&E lifted Phil Robertson’s short-lived suspension after the 67-year-old guy said some things to GQ magazine about how he believes homosexuality is a sin, according to the Bible. His comments raised an uproar with the LGBT community and with folks who were offended that someone known to be a devout Christian actually would say what he believes.

A&E knew what it was getting when it hired the Robertson clan to do this show, which I guess features them huntin’ and fishin’ and living in the great outdoors, aka the Louisiana swamp.

A&E made the wrong call, in my view, in suspending ol’ man Phil. It’s not that agree with the way he expressed himself. He spoke crudely to GQ, but that’s part of his shtick, or so I’ve been led to believe.

And the network knew all that.

All he did was encourage the audience that is drawn to the show. Those who Robertson offended aren’t going to watch anyway.

As for those of us out here who only have read about the show and followed the kerfuffle created by Duck Daddy’s remarks, many of us are quite likely now to watch just to see what all the fuss has been about.

I’m giving this some serious thought. I’ll let you know what I learn.