Does the name Mary Ann Vecchio ring a bell with you? Does it strike a familiar note? Hmmm … ?

It didn’t hit me, either, until I opened up a story online from the Washington Post Magazine. I read about Mary Ann Vecchio, who as the author of the Post piece described her, was the most well-known mystery person on Earth. 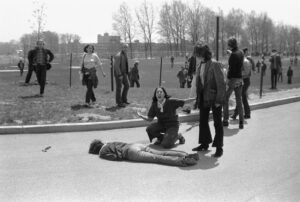 That’s her, kneeling over a young Kent State University student who had just been shot by National Guard troops on the Ohio campus. The students were protesting the Vietnam War on May 4, 1970. I had thought all along that Vecchio was one of those student protesters. She wasn’t.

She was just 14 years of age when a photographer — Kent State senior John Filo — captured this image for the ages. She had run away from her home in Florida to escape her continually quarreling and fighting parents. She ended up in Ohio and, as her very bad luck would have it, she found herself in one of the landmark occurrences of the 20th century.

I didn’t know that Vecchio was just a girl. I had thought all along she was one of the Kent State students who got caught up in that protest and who saw her friend gunned down in the melee.

She also found her image captured for eternity by a student photographer whose picture would win him a Pulitzer Prize.

I have attached the Post magazine article to this blog item. Take some time to read it. You will be mesmerized by the woman who tells her life story, about her failed marriage and her journey through a tumultuous life that has returned her home from where she fled all those decades ago.