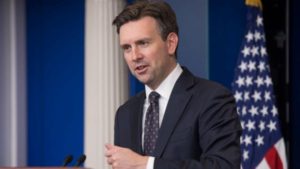 He’s now got a new gig that looks to be every bit as challenging — if not more so — as trying to convey a presidential message.

Earnest is now vice president in charge of communications for United Airlines, the carrier that has been bombarded with negative publicity over the past year.

Do you remember the gentleman who was dragged off a UAL flight because he declined to give up his seat? It was caught on video as the cops wrestled the guy off the plane. Not a good moment.

Oh, and then just recently we had the issue of the puppy that died after being stored in the overhead luggage bin, also aboard a UAL flight. Bad news, too.

Earnest will be asked to convey the airline’s message as it continues to struggle to regain its footing in the wake of these high-profile incidents. 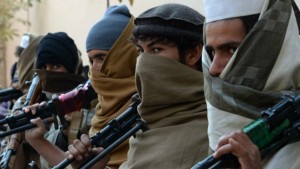 Let us hit the reset button for a moment.

When the United States secured the release of Army Sgt. Bowe Bergdahl, who’d been held captive by the Taliban for five years, the rationale was that the Taliban aren’t a “terrorist organization.” That’s what the White House press flack, Josh Earnest, said about the negotiation that led to Bergdahl’s release.

Our policy has been that we don’t negotiate with terrorists, Earnest said. Since the Taliban isn’t a terrorist outfit, well, that gave our side the opportunity to secure Bergdahl’s release from captivity in Afghanistan.

Then we awake this morning to news that at least 20 people have been killed in a terrorist attack at a Pakistan university.

Who took responsibility for the tragedy? The Taliban!

Someone has some explaining to do.

Many of us out here haven’t bought the notion that the Taliban is anything but a terrorist organization. The ultraconservative extremists have been terrorizing Muslim women for longer than any of us can remember. They’ve been denying citizens of Pakistan and Afghanistan access to education. How do they do that? By killing them.

Isn’t that the ultimate form of terror?

It appears to be time for President Obama’s national security team to take another look at how it defines the Taliban.

They got it wrong about this monstrous organization.

Hey, I get what the president said. He was making some kind of suggestion that it might be a good idea. I disagree with the notion of mandatory voting, as it seems vaguely un-American to tell us we must do something.

Actually, this is a healthy discussion to have.

Two states, Oregon and Washington, allow voters to mail in their ballots. Voter turnout in those two states is far greater than it is in, oh, Texas. It’s great that voters can cast their ballots in the comfort of their living rooms.

My preference? I still like the old-fashioned way of voting. Wait until Election Day, go to the polling place and stand in line with other voters, pass the time away waiting for a voting booth to become available. I dislike early voting and I do so only when I’m going to be away on Election Day.

I am of an old-school mentality that prefers — for lack of a better term — the pageantry of voting.

One idea worth considering is making presidential — and midterm — Election Day a national holiday. Don’t go to work or school. Don’t do anything that would divert attention from the task of voting. Perhaps have the event occur on a Saturday.

I heard the president clearly in Cleveland and understood the context of his remarks.

Voter turnout stinks. Big money is too pervasive. However, let’s not require Americans to vote.

However, his reason seems a bit nit-picky.

The White House said Obama doesn’t necessarily oppose the pipeline, but he opposes the process that delivered the bill to his desk.

The pipeline is supposed to ship oil produced from Canadian tar sands through the middle of the United States, ending up in ports along the Texas Gulf Coast. It then will be shipped overseas. Proponents of the bill say it will create jobs and will help ensure that the world’s supply of oil remains high, thus helping ensue cheaper prices for the oil around the world.

Although I do support the pipeline, the president’s veto makes a modicum of sense.

He thinks an environmental study process should have been allowed to run its course. Congress short-circuited that process — which includes a complete review by the State Department.

“Through this bill, the United States Congress attempts to circumvent longstanding and proven processes for determining whether or not building and operating a cross-border pipeline serves the national interest,” the veto message said.

As Bloomberg News reported: “White House press secretary Josh Earnest said Obama’s rejection was strictly about the legislation and not the project. It’s ‘certainly possible’ that Obama would eventually approve the pipeline once a State Department review is completed, he said, without giving a timetable.

“’The president will keep an open mind,’ Earnest said, repeating past administration language.”

The White House said the review is part of an intricate longstanding process that’s been honored over many years. Congress’s decision to fast-track the pipeline didn’t allow a thorough review of the total impact of the project.

Perhaps the State Department can complete its review in relatively short order, deliver its findings to Capitol Hill and the White House — and then we can go through this legislative process all over again.

Let’s do it the right way.

The White House has its collective dander up over those goofy remarks by Rudy Guiliani, who this past week said President Obama doesn’t love America.

I’ve commented on this. I won’t take up too much of your time with yet another commentary.

“The most high-profile example that I can think of was actually the last line of this year’s State of the Union in which the president said, ‘God bless this country we love,'” Earnest said Friday.

There have been countless other declarations of love of country.

Oh, I almost forgot. An election year is coming up and he’s got to find something — anything — with which to demonize the president.

The Taliban is a terrorist organization.

That’s my view and I’m sticking to it — no matter how finely the White House press flack tries to parse the definition of the term “terrorist.”

Press secretary Josh Earnest sought Thursday to say that the Taliban carries out “acts that are akin to terrorism,” but stopped short of calling the brutal killers and kidnappers “terrorists.” He said the Taliban falls into a “different category.”

I guess Earnest, speaking on behalf of the president, is saying the Obama administration believes it’s OK to negotiate with the Taliban, whereas the White House refuses to negotiate with, say, al-Qaeda, the Islamic State, Hezbollah or Hamas.

I’m beginning to sense that the famed nuanced foreign policy apparatus that the Obama White House is conducting might be getting a little too cute.

The Taliban are taking credit almost weekly for attacks against civilians in Afghanistan. They’ve brought considerable havoc as well to innocent victims in neighboring Pakistan. Good grief! The Taliban send in suicide bombers, they set off explosive on roadways traveled by villagers going to market, they kidnap and disfigure girls and young women who have the gall to stand up for their rights.

You’re more than welcome to correct me on any of this, but doesn’t any of that fit the classic description of a terrorist organization?

Think long and hard about this one.

When was the last time the White House admitted openly that it made a mistake. My best recollection goes back to, oh, around 1987 when President Reagan said as much about selling arms to rebel fighters in Nicaragua.

Still, the White House press spokesman, Josh Earnest, made a startling announcement today in declaring that the Obama administration erred in not sending a higher profile emissary to join the massive Paris “unity rally” in the wake of the massacre at the Charlie Hebdo magazine offices.

Secretary of State John Kerry said today as well that the U.S.-France relationship goes far beyond a single event, such as the Paris rally. President Obama has noted that France is our “oldest ally,” dating back to the American Revolution.

But yes, the White House made a mistake. I’m glad the administration is acknowledging it.

The current war on international terror began on Sept. 11, 2001 when terrorists conducted the cold-blooded, premeditated attack on the United States. We issued a call to arms and enlisted the aid of nations around the world.

The United States has been the main player in the world’s fight against the monsters who seek to terrorize the rest of the world.

There should have been a high-profile U.S. delegation at the unity rally, which featured the presence of Israeli Prime Minister Benjamin Netanyahu and Palestinian Authority President Mahmoud Abbas.

That does not diminish our leading role in the global war. Indeed, today’s White House admission well might enhance it.

President Obama’s press spokesman said today the president is set to veto a bill authorizing the construction of the Keystone XL Pipeline from Alberta to the Texas Gulf Coast.

I’ve waffled and wavered a bit on this, but I remain (more or less) convinced that the pipeline is a positive thing to do.

Thus, the president’s veto pen should go back into the drawer. But it won’t.

It’s going to mark the first big confrontation between the Democratic president and the Republican-led Congress that just took its seat on Capitol Hill. Republicans control both legislative houses, but they don’t have enough votes to override and Obama veto.

So, what’s the problem with the pipeline?

I recall hearing from the State Department that the environmental impact of the pipeline would be minimal. Is that an invalid assessment?

As for the impact of the oil on prices that are still in free fall, I happen to believe that any production of oil that continues to flood the market and enables worldwide supply to outpace demand is ultimately good for consumers — such as me and you.

So what if it won’t end up in North American gasoline tanks? It’s going to add billions of gallons of fuel to the world market. Is that not a net plus for consumers?

Let’s watch this confrontation unfold. It’s going to be the first of many nasty fights set to ensue between the White House and the 114th Congress.

Are you kidding me? Some folks still want the United States of America to pay ransom for hostages being held by Islamic State terrorists. Am I reading that correctly?

Not just no, but hell no! I’d use a stronger profanity than that, but you get the point.

Secretary of State John Kerry reiterated President Obama’s view that the United States shouldn’t put a price tag on those being held captive.

“The president continues to believe, as previous presidents have concluded, that it’s not in the best interest of American citizens to pay ransoms to any organization, let alone a terrorist organization,” press secretary Josh Earnest said at a White House media briefing. “And the reason for that is simple — we don’t want to put other American citizens at even greater risk when they’re around the world.”

Indeed, innocent Americans have died in gruesome fashion at the hands of these monsters. We learned after journalist James Foley was killed that his family had sought to negotiated a deal privately with the terror organization, but the effort fell short. It reportedly was stymied by government officials who didn’t want to enrich ISIL by giving them money — with no guarantee that Foley’s life would be spared.

The U.S. government cannot — it must not ever — negotiate with the Islamic State. It must hunt them down, bomb them to bits, do whatever it takes to kill every one of its leaders and as many of its murderous minions as it can find.