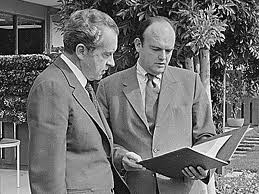 I’m still trying to process this bit of news from our nation’s past.

John Ehrlichmann, one of President Nixon’s chief aides, reportedly told an author that the president’s “war on drugs” had a more insidious meaning within the walls of the West Wing.

Erhlichmann supposedly said the drug war was meant as a way to shore up Nixon’s “southern strategy” that curried favor with white voters while targeting African-Americans and hippies who were opposed to the Vietnam War in particular and to Richard Nixon’s presidency in general.

A lot of Americans remember Ehrlichmann. He was the president’s chief domestic adviser and a leading figure in the cover-up of the Watergate scandal that eventually brought down the Nixon presidency.

He died in 1999, so he isn’t around to defend himself against the remarks that are just now being published in Harper’s magazine.

A part of me believes that President Nixon was quite capable of concocting such a nefarious strategy. Another part of me wishes and hopes it isn’t true.

Ehrlichmann’s five children have said the statements attributed to their father are false. They stand behind his character and say they weren’t raised that way.

According to reporter Dan Baum, writing in Harper’s, Erhlichmann said: “You understand what I’m saying? We knew we couldn’t make it illegal to be either against the war or black, but by getting the public to associate the hippies with marijuana and blacks with heroin. And then criminalizing both heavily, we could disrupt those communities. We could arrest their leaders. raid their homes, break up their meetings, and vilify them night after night on the evening news. Did we know we were lying about the drugs? Of course we did.”

The war on drugs is still being waged. It produced mandatory sentencing policies that federal judges have to follow. It was supposed to get tough on those who produce, buy, sell and consume the hard drugs such as heroin and various hallucinogens.

Has it worked? Well, drug use hasn’t abated in the nearly 50 years since the feds declared war on it. Moreover, I’ve seen the studies that suggest that African-Americans have been imprisoned at far greater rates than the rest of the U.S. population.

As for the motives behind the declaration in the first place, it saddens me beyond belief — if they are true.

The late president’s views on minorities, anti-war protesters and anyone who didn’t support his foreign and domestic policies are well-known to historians. They have been revealed in those infamous recordings of the president speaking to his top aides.

And what about John Erhlichmann’s personal motives? Did he buy into a hideous effort to fight back against the president’s enemies?

My own hunch is that he was loyal to the boss — Richard Nixon. When the boss told him to do something, then he followed orders. Does that make Erhlicmann a racist? We can’t ask him directly, so we’re left to speculate.

This isn’t the first time Americans have heard from officials seeking to atone for their mistakes. The late secretary of defense, Robert McNamara, revealed in the mid-1990s that he thought the Vietnam War was doomed to failure, even as he counseled two presidents to keep escalating the fight.

Many of us who are, sadly, are left to think the worst.