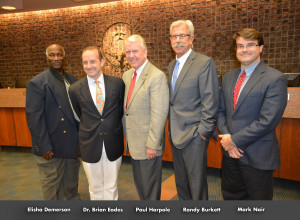 No … I don’t have anyone particular in mind.

Indeed, the Amarillo City Council has some time to ponder who should succeed Brian Eades, who’s leaving the council in July as he moves to western Colorado.

Eades is a grownup member of the council. He serves as one of two stalwart votes in favor of the momentum that the city is building toward its downtown revival process. The other sure-fire voice on the council is Mayor Paul Harpole.

Yes, the council has done well so far with its new three guys joining the team to move the city forward on its downtown rejuvenation. Crews have broken ground on the planned parking garage and on the Embassy Suites hotel across Buchanan Street from the Civic Center.

Work still needs to commence on the multipurpose event venue.

I don’t have serious concern about whether the MPEV will be built. I hope it is built and I hope the city welcomes an affiliated baseball team to play its home games at the shiny new ballpark.

My hope for the new council member runs along two tracks.

One is that he or she has a keen interest in moving the downtown effort forward. The projects have been discussed, debated and examined every which way from here to Kingdom Come. Amarillo voters made their decision known in a November referendum that they support a ballpark venue.

Second, I hope the next council member commits to running for election in the spring of 2017 when the city conducts its election for the council.

The most recent appointee, Ron Boyd, served as a place holder when he took the seat vacated by the death of Councilman Jim Simms. The next one, I hope, will take the seat with the understanding that he or she will seek a full two-year term.

The next council member will have plenty of time between taking office and the next election to earn either the voters’ approval or rejection next spring.

So, council members, proceed with all deliberate care.

The city is moving forward. It needs a governing council committed to maintaining that momentum.

The headline in the Amarillo Globe-News this week referred to the city’s “Road to change” embarking on a “rocky start.”

We’ll see about that. But the story below the headline does portend a possible change in the longstanding dynamic that has driven city government — which has been a desire for unanimity.

Place 1 Councilman Elisha Demerson had just taken the oath of office and then, during a work session, he wanted to delay a vote on the appointment of a part-time associate municipal judge. Why? He wanted to await the results of the June 13 runoff election in Place 4 between Steve Rogers and Mark Nair.

The City Council hasn’t always been an amen chorus on every single issue. The late Place 4 Councilman Jim Simms was known to offer a dissent or three when he felt strongly about something; if memory serves, he opposed the city’s ordinance banning texting while driving. And way before Simms joined the body, it had the late Commissioner Dianne Bosch offering dissents, such as whether the city should sell its public hospital or whether it should impose a curfew on teenagers younger than 17 years of age.

Of late, though, the council has sought to speak with a single voice.

That a new guy, Demerson, would seek to stall a routine appointment does seem to suggest there will be fewer 5-0 votes on issues in the future than we’ve seen in the recent past.

That could result in some actual public discussion and debate. Hey, maybe some tempers might flare.

The late Jim Simms now has his name on a public building.

It’s called the Jim Simms Municipal Building, named in his memory by the Amarillo City Council, which broke with tradition in honoring someone who gave so much of his time and energy to improving the city he loved.

The decision is prudent in another regard. Simms’s death the other day at age 73 means his legacy is now complete. There will be no chance of his messing it up with a big mistake.

Occasionally public entities make the mistake of honoring living individuals, only to have them embarrass themselves and the institution that honored them.

Universities are known to put themselves into that kind of bind on occasion. West Texas A&M University once honored T. Boone Pickens — who’s very much alive — by putting his name on a building at the College of Business, only to pull it down over a misunderstanding that involved a financial commitment Pickens had made to the university.

Amarillo’s building naming policy doesn’t allow for that kind of thing to happen.

As far as I know, the only other city-owned structure bearing an individual’s name is the international airport, which is known as Rick Husband Amarillo International Airport — named after the Amarillo native who commanded the shuttle Columbia on that tragic mission in early 2003. Husband and his six crewmates died when Columbia disintegrated upon re-entry.

I’m glad to see Simms’s memory honored in this manner.

He loved this city. Simms poured his soul into any project he undertook. The city has done right by honoring him in this fashion.

The comment at the end of the Amarillo Globe-News’s online story said plenty about the appointment of Ron Boyd to the Amarillo City Council seat vacated by the death of the late Councilman Jim Simms.

“At least it’s not another rich white guy,” the comment said, the writer’s tongue no doubt planted in his or her cheek.

Boyd’s been on the council before. He’s back now to serve the remainder of Simms’s term. Much to my chagrin, at least, he’s said he won’t seek election to a full two-year term next year.

Too bad for that.

I had wanted the city to find someone who would seek election. I also suggested that Mayor Paul Harpole should concentrate his search on the north side of the city, perhaps looking through the Heights neighborhood, for a qualified individual to serve.

There’s been plenty of discussion over many years about the lack of representation on the council from the north side of the city. Simms’s death and the vacancy it created provided the city with a great chance to give that side of town a representative on the governing body.

Instead, Harpole and the council played it “safe” by putting Boyd back in the hot seat.

I like and respect Ron  Boyd. I enjoyed working with him when he served on the council before while I was working for the newspaper. However, respectfully speaking of course, Boyd is old news. He’ll take up space on the council until next spring, then will give way to someone else elected from the city at-large.

Therein lies one of the city government aspects I’ve come to believe needs changing: the city’s at-large system of electing its council members. My heart has changed on that one, as I now would favor a revamping of the city’s voting plan that allows for a more equitable distribution of representation on the council.

I doubt strongly we’ll have it after next year’s election.

Amarillo’s mayor has been given an actual task to perform with the death of City Councilman Jim Simms.

Paul Harpole will go through his grief over the loss of Simms, who cast a far larger shadow over this city than his short physical stature would suggest.

Then he’ll get to select the next councilman to sit at Place 4.

Here’s some advice, Mr. Mayor, from one of your constituents — me: Don’t pick a place-setter, someone who’ll just serve the remainder of Simms’s term and then walk away. Find someone who’ll run for election next year when the entire council faces voters.

The city has some key decisions coming up regarding downtown revitalization. There will be, for example, a proposal for an extreme makeover of the Civic Center, which likely will require a citywide vote. The city needs five council members with a serious commitment to standing behind whatever vote they cast on that notion.

The city charter doesn’t give the mayor a lot of actual power, given that he or she is just one of five council members representing the same citywide constituency as the rest of the council. All of them select the city manager, who does virtually all the heavy lifting at City Hall.

This time the mayor gets to make the call all by himself — I presume after consulting with constituent groups, his colleagues on the council and with potential candidates for the post.

One more thing, Mr. Mayor: You might think about concentrating your search in the areas of the city where residents have complained about “underrepresentation” on the City Council. The North Heights comes to mind.

Good luck, Mr. Mayor. You’ve got a big job ahead.