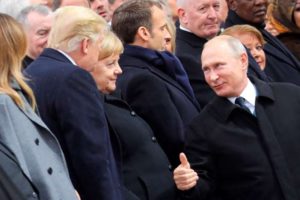 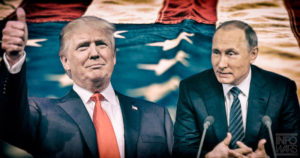 Donald Trump and Vladimir Putin are going to meet a second time — but not until after the first of the year.

The announcement came from national security adviser John Bolton, who — borrowing the president’s favorite epithet describing the examination of the “Russia thing” — said the meeting would occur after the “witch hunt” has concluded.

Robert Mueller is proceeding with his probe into whether the Trump campaign colluded in 2016 with the Russians operatives who attacked our electoral system. The special counsel is not the partisan hack he has been accused of being by, um, actual partisan hacks.

The next summit between the U.S. and Russian presidents should proceed. I support the idea of the two leaders talking to each other. They should face each other and they should talk openly and candidly about the issues they have in common and those that separate them. They also should do so publicly to the extent they can.

The problem, though, still rests with that first summit in Helsinki. They went into a closed-door meeting and the world doesn’t yet know what they discussed, where they agreed and what they decided. Then the two leaders had that press conference in which Trump rolled over in front of Putin in that ghastly show of weakness by the so-called “leader of the free world.”

As for the juxtaposition with special counsel Mueller’s investigation, let’s just wait to see what conclusions are drawn once the probe is finished.

We have an extremely fluid situation in front of us. The Mueller probe can end in any number of ways, some of which might bode poorly for the president.

And, oh yes, we have that midterm election coming up.

If at least one congressional chamber flips from Republican to Democratic control, well … let’s just wait to see how that plays out.

I am not the first person to say this out loud, but I’ll say it anyway.

Donald Trump and Vladimir Putin need to tell the world what the hell they talked about in that closed-door meeting in Helsinki, Finland. Come clean, Messrs. President. You represent nearly 500 million people between you. The world wants to know.

Republican lawmakers are starting to put a bit of heat on the president. According to The Hill: Congressional Republicans are urging the White House to get ahead of the Kremlin by defining what was and wasn’t agreed to. What was said between the two leaders, they admit, remains a disconcerting mystery.

Not only that, Americans need some clarity on the questions that are gnawing at many of them: What, if anything, does Putin have on Trump? Why won’t the U.S. president seriously condemn the Russian president’s ordering of the attack on our electoral system in 2016? Where will the path to bilateral friendship take the two nations? Did the leaders make any verbal agreements between them? If yes, then what the hell are they?

Then there’s this, also from The Hill: Members of Congress worry that Russia will use the Helsinki summit to undermine U.S. relations with NATO allies, especially with former East bloc and Soviet states that Putin views as within his country’s traditional sphere of influence.

Lots of questions. Lots of mystery. We need some transparency and accountability. Now! 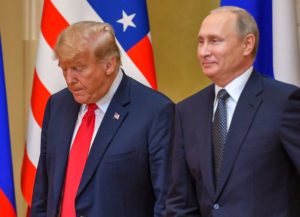 Donald Trump’s amazingly clumsy “clarification” of what he said in Helsinki brings to mind a stellar campaign promise he made while running for president in 2016.

The told us he would surround himself with the “best people” and he would speak to us using the “best words.”

Yes, he has some good folks in key places. Defense Secretary James “Mad Dog” Mattis is a good one; so is Director of National Intelligence Dan Coats; I’ll put United Nations Ambassador Nikki Haley in that crowd, too. Secretary of State Mike Pompeo has possibilities.

Many of the rest of them? Not the “best.” Not by a long shot.

How about those “best words” Trump pledged? Let’s turn our attention to that Helsinki clown show that unfolded before the entire world at the beginning of the week.

There was Donald Trump standing alongside Vladimir Putin, the former KGB chief spook who serves as Russia’s president.

A reporter asked the president whether he doubted U.S. intelligence assessments that Russia attacked our democratic process. Trump said he spoke with Dan Coats, that he accepts the intelligence agencies’ assessment that Russia interfered in our election, but that Putin had offered a “strong and powerful denial.”

Then he said, “I don’t know why they (the Russians) would” interfere.

To borrow a phrase: Oops!

More than 24 hours later, Trump convened a Cabinet meeting and declared he meant to say “wouldn’t” instead of “would.” He then made the term “double negative” famous around the world.

I’ll inject here that Donald J. Trump made sure reporters heard him praise Putin’s “powerful” denial of election interference during that joint appearance in Helsinki.

That is how the president “misspoke”? I do not think so.

Nor do I believe he uses the “best words” to convey whatever message he wants heard.

I know I’m not the only person on Earth who believes this.

I’ve never heard the Russian strongman speak English. He had that translator in the Helsinki meeting with Donald J. Trump. He always communicates through a translator, for that matter.

But here’s the deal: Putin is a former head of the KGB, the highly sophisticated spy agency that operated during the days of the Soviet Union. Does it make any sense that the top KGB spook wouldn’t be fluent in English, the language of international trade, commerce, transportation? (And yes, I intended to type the word “wouldn’t.”)

All of this makes me wonder why we keep talking about translators and ensuring that they convey the messages delivered by whomever the Russian president is meeting.

My strong hunch is that Vladimir Putin understands perfectly whatever the U.S. president was giving up, er … telling him when they were behind closed doors.