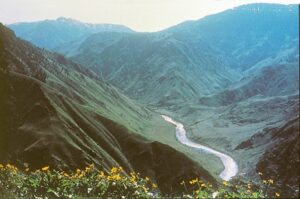 VALE, Ore. — I didn’t snap the picture attached to this blog post, but it illustrates a point I want to make with this brief message.

The picture is of Hells Canyon. The Snake River running along the floor of this chasm separates Oregon from Idaho.

The canyon is part of what’s called the Hells Canyon National Recreation Area. Now, I grew up in Portland, about 330 miles west of this region, but I long have lamented that this magnificent piece of God’s good Earth isn’t a national park. Yes, I have wanted that designation since I was a kid skipping rocks across puddles in Portland.

Oregon has a single national park. Crater Lake is a beaut. It fills a caldera left by the explosion about 10,000 years ago of Mount Mazama. It’s the deepest lake in the country. It is as blue as blue gets.

Hells Canyon, though, sits on the edge of a region known as the “Oregon Alps,” also known formally as the Wallowa Mountains. I want the federal government to designate this region as a national park.

Yes, it’s not a simple task. There exists a certain amount of politics involved.

Let’s face a brutal fact as well. There ain’t gonna be a national park named anywhere in this country as long as Donald J. Trump serves as president. Trump seems to hate public land that has been set aside for recreational purposes. He has issued executive orders removing that land from public care, allowing private interests to harvest its mineral wealth.

Hey, there’s a certain irony in this discussion. Hells Canyon happens to be situated in the heart of Trump Country. The eastern region of Oregon and all of Idaho is quite friendly to this president.

I have no proof of this, though, but my strong hunch is that many residents of the northeast corner of Oregon and neighboring Idaho would welcome a national park designation for Hells Canyon with open arms.

Vale is just spittin’ distance from the Snake River just a bit south of the southern reaches of Hells Canyon. Being here simply reminds me of what I have wished for since I was a whippersnapper.