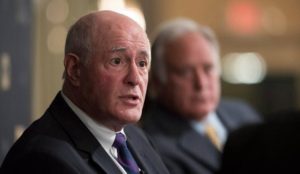 Even though I am far removed from state and local politics these days by virtue of my retirement from full-time journalism, I do maintain a fairly high level of interest in the goings-on.

Such as what might be brewing in Austin between Texas Lt. Gov. Dan Patrick and a longtime nemesis, Republican state Sen. Kel Seliger of Amarillo.

I’ll stipulate up front that I have declared my pro-Seliger bias. I know the senator quite well and I consider him a friend. He and Patrick have butted noggins already in previous legislative sessions. Patrick has sought to punish Seliger for allegedly “insulting” a key aide of Patrick’s. My reading of Seliger’s response has been it’s rolled off his broad back.

Now, though, comes this nutty legislation that might get stalled in the Senate. It’s the one that would allow any Texan who lives to pack a firearm even without obtaining a state-issued permit under the state’s concealed-carry law. Seliger thinks the current system works just fine and hasn’t signed on to the bill already approved by the House of Representatives.

Patrick, meanwhile, says he’ll move the bill forward once it obtains the required 18-vote majority it requires under Senate rules; Seliger’s holdout leaves the bill one vote short before it can be taken up by the full Senate.

Seliger is leaving open the possibility that he could be persuaded to support the bill. I hope he stands firm. It’s not that I want Patrick to punish him some more. Indeed, there’s little more that Patrick can do to Seliger above what he’s done already, which was to strip him of committee chairmanships and reassign him from some of the higher profile Senate panels on which he served.

I dislike the proposed legislation. No … I hate it!

With that, I will implore my friend to stand firm. Be strong.