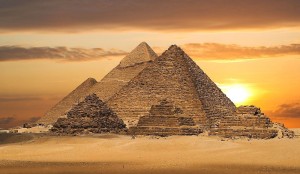 While the media and a number of political pundits obsess over whether Dr. Ben Carson really got a scholarship offer to West Point, I think it’s good to turn our attention to the here and now.

What was it he said the other day about the Great Pyramids? That they were built to, um, hold grain?

It’s not that the Pyramids’ reason for being there matters in the world of current geopolitical relationships. However, the remark seems to call into question the good doctor’s understanding of history.

Think of this for just a moment.

Carson is a leading contender for the Republican Party presidential nomination. Weren’t we all taught — Dr. Carson included — that the Great Pyramids were built as tombs for the pharaohs?

So, what’s he saying here? Does he know something that centuries of archaeologists have missed? Haven’t they uncovered the embalmed remains of Egyptian royalty from those structures?

You might not believe this, but I am pulling for Dr. Carson to get put this West Point story aside. I guess, though, it’s because I want the media to focus on the things he’s saying today.