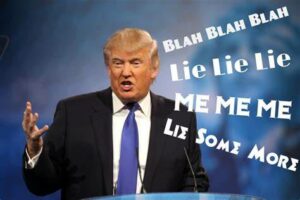 MSN.com posted a question today as part of its ongoing rolling random online “polls” relating to issues of the day. This one dealt with the economy.

Do you tend to believe economic forecasts from the White House or outside experts?

Hmm. Let me ponder that one. Actually, this was one of the easier questions to answer.

I’ll start by saying that I do not trust the White House to tell me the truth about anything at all. Not a damn thing! Not as long as Donald Trump is the Man of the White House, the guy in charge of the executive branch of government.

Who do I believe? The outsiders.

The question, though, cuts to the heart of what I perceive to be the No. 1 issue facing this White House: its trustworthiness.

They all take their cue from the man who won the election in 2016. Donald Trump is fundamentally a liar. He cannot tell the truth even when it suits his interests to do so. He lies when he has no reason to lie. Remember when he said his father was “born in Germany”? He wasn’t. Fred Trump was born in New York City. Why does the president lie? He cannot help himself! He cannot stop lying.

Some of Trump’s closer political allies once called him out on his lying. U.S. Sen. Ted Cruz of Texas, who ran against Trump for the 2016 GOP presidential nomination, once called him an “amoral” individual who couldn’t tell the truth if his life depended on it. He also threw in “sniveling coward” for good measure. Well, he’s changed his tune, as has U.S. Sen. Lindsey Graham of South Carolina, another former Trump foe in 2016. I am not in public life, so I am free to stay the course.

Trump is a lying, conniving, self-serving con man who has set the tone for the White House he runs.

How in the world can anyone believe anything from this administration, given its record of lying.

Someone once said “The fish rots from the head down.” So do presidential administrations.