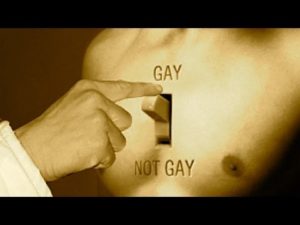 I suffer occasionally from a case of politics-induced heartburn.

It’s flaring up again. The catalyst this time is gay conversion therapy, which is being debated in the Texas Legislature. Some lawmakers want to make it illegal to force someone to undergo the quackery associated with trying to “convert” a gay person into a straight person. Most of them, though, seem satisfied with allowing individuals to endure such nonsense.

A handful of states have made gay conversion therapy illegal. They recognize that a person’s sexual orientation is part of his or her DNA. It’s who they are. Therefore, it is impossible to “convert” someone from one orientation and guide them toward something else.

I am nearly 70 years of age. My memory fails me at times, but so help me, I do not ever recall a moment when I was coming of age all those years ago when I gave any thought about whether I preferred to be intimate with women.

Thus, I find it impossible to believe that those who are gay make that choice consciously.

I am left to wonder two things: Why would anyone choose to be vilified by those around them? Why, too, is it often so difficult for those who are gay to “come out” to their loved ones?

Let me clear the air on one key point as well. Even discussing anyone’s sexuality makes me highly uncomfortable. It is a subject that I consider to be no one’s damn business. It is a part of one’s life that should remain utterly, completely and totally private.

Not everyone believes that, apparently. Some legislators in Texas and in many other states believe someone’s sexual orientation should become a matter of public policy.

That’s where this idiocy of “gay conversion therapy” comes into play.

I know I’m going to get grief for stating all this. That’s all right. I get that many Americans feel strongly about gay conversion and believe in their heart and soul that it’s a legitimate psychological therapy. I am not one of them.

Still, the heartburn I suffer from this discussion is real.

There is one constructive way to look at this, though. It is that we’re actually debating this issue in Texas. Maybe that’s a sign of progress.

Texas politicians seem to think they’re the only correct thinkers in a nation that seems to be going in the opposite direction.

An example? Gay conversion therapy, which is drawing opposition from medical professionals and politicians throughout the land, appears to be showing no signs of slowing down in Texas, according to the Texas Tribune.

Have mercy on us all.

Gay conversion therapy seeks to persuade people that they aren’t actually gay. Never mind scientific evidence that someone’s sexual orientation is built into their DNA the same way, say, their hair and eye colors are built in.

That hasn’t stopped politicians from suggesting that a healthy dose of religious teaching, which the critics contend is occurring, will get rid of someone’s homosexual urges. As the Tribune reports, “The American Psychiatric Association has condemned it, and experts say it can cause mental harm to individuals.”

Hey, what does a group of trained medical professionals know?

“’Words hurt sometimes, and some of our clients have been upset about his public condemnation of these things — it has really hurt their feelings,’ Pickup said. ‘Reparative therapy is there for people who believe that for them, homosexual impulses arise not because of something genetic but because of emotional and sexual abuse.’”

State Rep. Celia Israel, D-Austin, has been trying to get a hearing before the House State Affairs Committee. She’s been stonewalled so far. Israel is hoping at least to get the subject on the table for some open debate.

Something tells me that with conservatives owning a supermajority in the House of Representatives and a strong majority in the Senate, the chances of at least a hearing are somewhere between slim and none.

Meanwhile, Texas will stand increasingly alone in standing by the notion that you can convert gay people into something they are not.