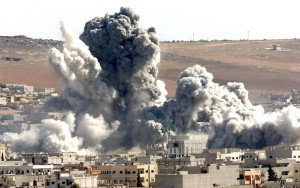 There might be a glimmer of good news on which to build regarding the air campaign against the Islamic State.

It is that U.S. intelligence data suggest that the Islamic State’s ranks are thinning, that defections from the battlefield are increasing and that the air campaign launched against the terror network is having a direct impact.

It’s foolish, of course, to get ahead of ourselves here. President Obama said ISIS had been “contained,” and then 24 hours later Paris was attacked by Islamic State terrorists.

But consider this from USA Today: “Top military officials estimate that the campaign has killed 23,000 Islamic State fighters, raising their death toll by 3,000 since mid-October. Army Gen. Lloyd Austin, who oversees U.S. military operations in the Middle East as chief of Central Command, told troops last week in Iraq that the campaign is inflicting maximum pain on the enemy, according to a military official who attended the meeting but who was not authorized to speak publicly about it.”

What does one make of that? Maximum pain ought to mean what we think it means, which is that the air strikes are inflicting the desired misery on this cabal of murderous religious extremists.

France has deployed its air power against the terrorists in the wake of the Paris attacks. Russia has joined the fight with full force after ISIS took responsibility for the downing of the Russian jet and the deaths of 224 passengers and crew.

Is the conflict heading for a quick conclusion? Hardly. However, it’s good to take note of positive trends when they present themselves. Let us hope they spur our combined military forces into delivering more pain and misery to the enemy.