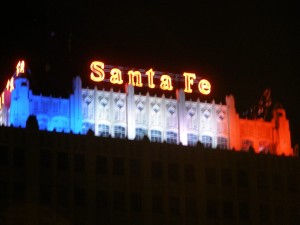 It’s only a symbol of solidarity, but given its location and the occasional animosity that flares up around these parts toward the people of a certain country, it’s worth a notation here.

The picture is a bit blurry, but it showed up on social media overnight. The 85-year-old Santa Fe Building — which houses several Potter County offices — arguably is one of the more iconic structures in downtown Amarillo. Its top floors have been lit up in the colors of the French flag.

The statement of solidarity with our French allies in the wake of the Paris terrorist massacre is not unlike what’s been done in communities across the United States. The Islamic State has taken responsibility for the attacks that killed 129 people and injured hundreds more. It was the worst attack of terror in France since World War II.

We feel their pain, as they have felt ours.

President Obama noted in the immediate aftermath of the terror attacks that France is America’s “oldest ally.” The French stood with us as we fought to gain liberation from Great Britain during our American Revolution.

Some of us here have ridiculed France, particularly since 9/11, when certain political elements in that country opposed our going to war in Afghanistan in response to al-Qaeda’s brutal attack on this country.

Do you remember “freedom fries”? How about the continual references to France needing the Allies’ military muscle to defeat the Nazi occupiers during World War II? The French became the butt of jokes.

Today, though, we stand with France. Even here, in this part of the United States, where those anti-French feeling ran deeply.

I’ll assume for a moment that Potter County Judge Nancy Tanner made the decision to color the top of the Santa Fe Building to honor France’s struggle to recover from the monstrous act of terror.

Thank you, judge, for showing your true colors.