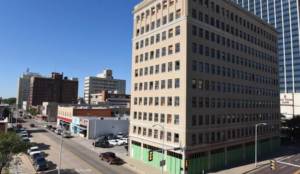 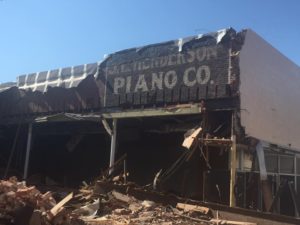 This picture is of a building that’s coming down on Polk Street,  near Seventh Avenue, in downtown Amarillo.

A friend of mine, Wes Reeves, snapped it and posted it on social media earlier today.

I’ve known Reeves for many years and I have developed a keen affection for his own love of local history and things that are old and worth preserving.

Reeves loves old buildings. He believes communities must honor their past by doing all they can to preserve those vestiges of history.

He also noted as he posted this photo that there’s some good news accompanying the demolition of something old. It is that Amarillo is getting something new: a brew pub that is planned to be built in the city’s evolving downtown business-and-entertainment district.

Which brings me to the point here.

It is that the city is changing its central district personality.

Is the city going to forsake every single shred of history? Good heavens, no!

Amarillo already has preserved the historic Fisk Building and turned it into a classy hotel. Potter County has renovated the exterior of its courthouse, along with restoring and reviving the Santa Fe Building. There will be plenty of other restoration projects ahead; I’m hoping — along with the rest of the city — for eventual restoration of the Barfield Building and the Herring Hotel.

The new features, though, ought to be as welcome here as efforts to preserve the old ones.

And no doubt about it, we’re getting plenty of new business.

Yes, downtown is changing. That change necessarily means we have to make way for the change. If it involves the occasional removal of something old that no longer is functional, well, I’m all for that, too.