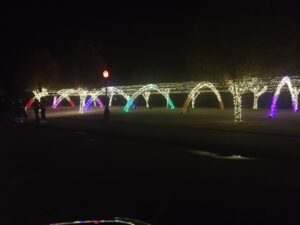 Farmersville (Texas) Mayor Bryon Wiebold had this notion that one way to bring smiles to the faces of community residents who have endured one of the most miserable years in memory was to light up the city he leads with Christmas lights.

So, he persuaded the City Council to approve a resolution establishing a program called Farmersville Lights. Judging from what I saw tonight while touring Farmersville Parkway and the downtown square is that the mayor’s idea is paying off … in spades!

The city turned on the lights on Dec. 1. They’ll shine in the city until the end of the month. Wiebold hopes it becomes an annual event. I share his hope for a bright future for Farmersville and its effort to bring a little holiday cheer to its residents and those of us who come to visit the city and enjoy the lights.

Indeed, my wife and I drove from our home in Princeton and, oh yes, we had our granddaughter and her parents, who came from Allen to take a peek at the holiday lights.

Farmersville Lights is being financed through a number of donations from businesses throughout the city. Wiebold received commitments for sponsorships, went to the council for its approval and the program took off.

I want to offer a round of applause for the City Council’s endorsement of the mayor’s idea. Rest assured, I saw more than a few smiles on the faces of those who enjoyed the lights as this lousy year draws to a welcome close.

I have this sense that a lot of communities all across our great land are reaping the benefits of similar programs this time of year. I mean, when we endure a nasty presidential election in the midst of a deadly pandemic, how can any city in America miss the chance to put smiles on people’s faces? 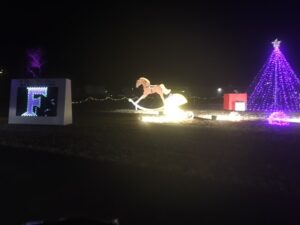 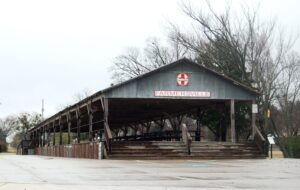 We are going through one of the grimmest years imaginable, with thousands of Americans dying of a viral infection, an economy being shattered and with human beings learning new ways to interact with each other.

However, I want to offer a shout out to a young man who took over as mayor of a community with which I am becoming increasingly familiar.

Farmersville Mayor Bryon Wiebold took office this past spring and he is, shall we say, finding ways to cope with the “new normal.” Weibold has talked the City Council into approving a “Farmersville Lights” event at the end of this tumultuous year. The city is going to light up during Christmas, along Farmersville Parkway from Texas 78 to Main Street. The city’s downtown square will becoming a festive site. Merchants will compete in a Christmas decoration competition. There will be horse-and-buggy rides.

Wiebold’s effort is to end the year on a high. How can it end any worse than what many of us have experienced already?

Farmersville is not unlike many communities across the land in that it has had to cancel events left and right. The COVID crisis has taken a terrible toll on people’s emotions and Farmersville has felt it along with all sorts of cities and towns. I mean, the State of Fair of Texas was canceled in Dallas, and they played the Texas-Oklahoma football game before a sparse gathering of folks scattered throughout the cavernous Cotton Bowl; too bad, as well, because a lot of football fans missed a heck of a game.

Farmersville wants to put a smile on people’s faces and Wiebold, along with Main Street manager Kevin Casey, are crafting an event that the mayor hopes becomes an annual happening.

I have the pleasure of covering the Farmersville City Council for the Farmersville Times, a weekly newspaper that circulates in the Collin County community. I have been pleased to watch this event unfold in real time.

I have to say that Mayor Wiebold’s idea to collect corporate and community sponsorship to fund the Farmersville Lights project is as capital an idea as I can imagine, given the circumstance with which the city is dealing.

At least one Texas community is working actively now to put smiles on the faces of residents who need a reason to smile. May other cities and towns follow suit.

As Wiebold said after getting some push back from one resident who objected to the city proceeding with this effort: “How can you argue against Christmas?”