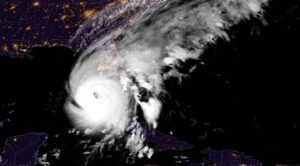 Hurricane Ian has become the latest natural enemy No. 1 to visit the United States of America.

The storm slammed into Florida’s Gulf Coast, bringing storm surges that exceeded 12 feet. The death count from the monster storm has yet to be ascertained, but I did hear that Florida Gov. Ron DeSantis has predicted it could go into “the hundreds.”

Oh, my. We are left where the weather has been gorgeous to pray for the first responders who do what they do, which is they run toward the danger. Firefighters, police officers, medical EMTs all have answered the call, which they promise to do when they pin the badges to their shirts.

Texans who are no strangers to natural calamity have rushed to aid. Oncor, the electric utility, has deployed 500 technicians to help restore power to millions of Floridians. The Cajun navy, comprising residents and their boats headed toward the storm. Texas Baptist Men, long involved in assisting where emergencies arise, again are on the job.

President Biden has declared Florida to be major disaster area, which means the federal government will expedite aid as officials on site ascertain their needs.

That’s what residents of the United States of America do. They rush to the aid of others.

Meanwhile, the rest of the nation can offer plenty of prayer and good karma.