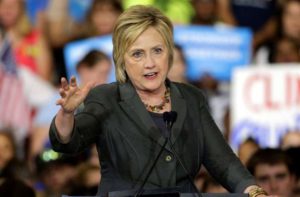 Hillary Rodham Clinton won’t be indicted for her use of a private e-mail server while she was secretary of state.

That’s the conclusion of the pros, the career prosecutors and investigators at the FBI.

So, that’s the end of the controversy, correct? Clinton now can campaign for president of the United States without the sniping, carping and conspiracy-minded criticism leveled by her foes?

Excuse me while I bust a gut.

No, FBI Director James Comey’s own words today have given the anti-Clinton cadre plenty of ammo to sling at the Democratic candidate for president.

He called her “extremely careless” in her use of the private server. He said he found no “clear evidence” of criminality.

Right there, you’ll see foes translate “careless” into words like “incompetent” and “inept.” No “clear evidence” will be parsed to mean that there’s something smelly, but that the feds just couldn’t find anything with which to hang a criminal charge.

The Clinton campaign, of course, will spin these findings differently. They’ll congratulate the FBI for its professionalism. Indeed, James Comey remains high on most observers’ lists of impartial, hard-nosed and fair-minded law enforcement authorities.

Hillary Clinton no doubt will have steeled herself for the onslaught that awaits. Her enemies will quite naturally suggest or imply that her husband Bill’s meeting with Attorney General Loretta Lynch in Phoenix played some sort of role in the FBI’s decision to forgo seeking an indictment. That’s how conspiracy theorists work.

What the heck? Hillary and Bill Clinton ought to have developed rhino-hide by now, given all the hideous accusations they have faced dating back to when Bill Clinton was Arkansas governor.

From my perch, I believe James Comey is a pro and that the FBI did its job with due diligence.

He did, though, toss out a couple of red-meat morsels for Clinton’s enemies to chew on — which I believe they’ll do with great gusto.

This notion of a congressional investigation into Hillary Clinton’s use of personal email accounts while she was secretary of state is beginning to sound laughable.

Some of us out here will break out into hysterical howls if Clinton does the improbable — and doesn’t run for president of the United States next year.

Congress will drop the story like a bad habit.

House Speaker John Boehner is considering a congressional probe. House Benghazi Committee Chairman Trey Gowdy is going to peek into whether Clinton’s personal account email use somehow is related to the Benghazi mess of September 2012, the fire fight that killed four Americans, including the U.S. ambassador to Libya.

This has all the apparent earmarks of a political hatchet job.

Clinton is likely to run for president. Her Republican critics in Congress and elsewhere don’t want her in the White House. She’d be a formidable candidate and as it stands right at this moment she remains a strong favorite to defeat almost any GOP challenger.

But what if she doesn’t run? What if she decides, “You know, I just don’t think I have the stomach for this. I’ve taken enough of a battering over this Benghazi thing, during my time in the U.S. Senate and, oh yeah, when I was first lady and trying to push through my husband’s health care overhaul — which went nowhere.”

My hunch is that all these probes, these searches for the truth, these quests to find an email scandal where none exists will disappear.

The opposition will pat itself on the back, say “so long” to Hillary Clinton and go about looking for demons behind other closet doors.

Hillary Rodham Clinton can put the email controversy to bed today. It might be finished. Then again, her foes well might decide to keep the flames going.

The former secretary of state will conduct a press conference in New York. She’ll take questions about the email tempest — the one involving her use of a private account while she ran the State Department.

I refuse to call this a “scandal” because it doesn’t rise that level. It is a problem, though, for the presumptive Democratic presidential candidate.

Congressional investigators are trying to link some missing emails to the Benghazi matter involving the deaths of four Americans in September 2012 at the U.S. consulate in Libya. That’s the politics of it: Republicans keep smelling blood and keep looking to inflict a mortal wound to Clinton’s budding presidential candidacy.

In a strange way, I see this controversy developing the way the Barack Obama “birther” controversy was kept alive before withering away.

Those on the far right kept insisting that Obama wasn’t constitutionally qualified to serve as president because, they said, he was born in Africa. He wasn’t. The president said he was born in Hawaii. The controversy persisted until the night of Obama’s re-election in November 2012.

I have a strong suspicion that the email matter will keep boiling throughout this year and most of next — until when or if Hillary Clinton is elected president of the United States.

U.S. Sen. Lindsey Graham is appealing to the technologically challenged.

The South Carolina Republican says he’s never sent an email and prefers to talk face to face with his South Carolina constituents. Well, good for him.

Graham said on “Meet the Press” that the next president of the United States — which might be him, although that seems to be among the longest of long shots — should be good with people, not technology.

The subject came up in a discussion of the email flap that keeps hounding Hillary Rodham Clinton and her use of a private email account while she served as secretary of state. Some Republicans, such as Rep. Darrell Issa of California, suggest Clinton might face “criminal charges.” Oh, brother.

Maybe it’s just me, but my strong hunch is that in the remote chance Graham gets elected president next year that he’ll have plenty of staff sitting around waiting to communicate via email with a pertinent foreign leader. Were he climb aboard Air Force One just to talk to someone, say, in the Middle East, well … that could get a little expensive.

And haven’t Republicans been casting stones at the current president, Barack Obama, and his family over their alleged overuse of that big jumbo jet?