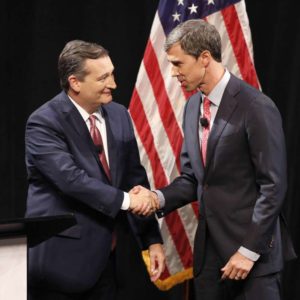 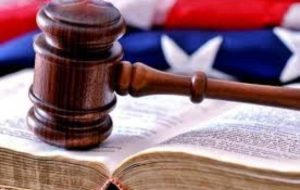 Donald J. Trump wants to change U.S. immigration policy by diminishing the role of — get a load of this — the federal judiciary.

Trump wants to toss all illegal immigrants out of the country without the benefit of having their cases heard by judges.

The president of the United States today yet again took dead aim at our immigration policy. He called it the worst policy “in the history of the world.” He then said something quite remarkable in a brief give-and-take with reporters gathered at the White House.

Trump noted that when immigrants cross our border, “they have judges.” Yes, judges. These are the men and women who take an oath to administer the law in accordance with the U.S. Constitution, to ensure that federal law doesn’t violate the Constitution.

Federal immigration law — indeed, the 14th Amendment to the Constitution — grants “any person” the right to “due process” and “equal protection” under the law. It doesn’t limit those guarantees to U.S. citizens, let alone to those who come here legally from another nation.

The president’s desire to toss out the Constitution, to ignore existing federal statutes crosses the line into a desire to create an autocracy. He wants to throw into the crapper a fundamental tenet that the nation’s founders insisted on when they created this government. That tenet established a judicial system that is ostensibly free of political pressure and coercion.

Yes, we need more federal judges — not fewer of them — to deal specifically with this issue of immigration. Yet the president now disparages the role these judges play? He disrespects their vital contribution to the administering of justice? 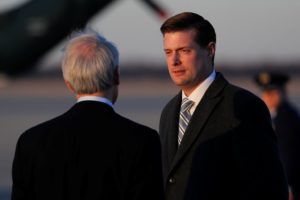 It’s hard to believe, but Donald J. Trump once stood tall for the cause of “due process.”

A one-time White House staff secretary, Rob Porter, faced accusations that he beat up two former wives. He was forced to quit amid storms of protest.

The president then asked out loud about whatever happened to “due process.” Why, Porter deserved the same level of due process that the country grants to everyone else, Trump said.

These days, due process has been kicked to the curb. The president now believes that every immigrant who comes into the country illegally should be rounded up and kicked out immediately. Due process be damned! They don’t need any adjudication, he said.

What gives? Does the president favor due process or not?

Sure, I get that he’s trying to make a political point. However, some principles should withstand political pressure.

U.S. law allows illegal immigrants to have their cases heard by the judicial system. Judges have an obligation, according to the law, to hear the immigrants’ stories and decide — based on the law — how their case should be resolved.

The president, though, says that’s no longer necessary.

Get ’em out of here, he says. All of ’em! Refugees? Those fleeing persecution? Violence? Forget about it!

Kick them all out, he says. Now!

Donald J. Trump is hardly a champion of civil liberties.

Due process? Who needs it? Why, he is ready to “take guns first” and worry later about “due process.”

The president’s latest popping off occurred today in a meeting at the White House with Democratic and Republican senators. The issue dealt with guns, naturally.

Trump’s statements today continues to add confusion to this debate in the wake of the Parkland, Fla., high school massacre that killed 17 students and staff members.

He has endorsed the notion of raising the minimum age to 21 to purchase firearms; the president wants to arm teachers, giving them firepower to take out shooters when violence erupts; now is wants to grab guns first and worry later about “due process.”

Well, we know what the president thinks of “due process.” He has griped about a White House staff secretary being forced out of office over allegations of spousal abuse, that he was denied “due process.” Oh, but then he egged on rally crowds during the 2016 campaign to “lock her up” when they started chanting about allegations involving Hillary Rodham Clinton.

There’s a glimmer of good news, though. The National Rifle Association is likely to get angry over the president’s latest rhetorical riff.

I am unwilling to wager, however, whether the president will — pardon the pun — stick to his guns when the NRA starts putting on the pressure. 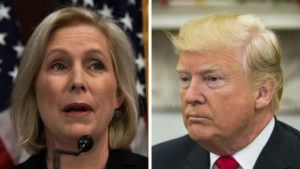 Kirsten Gillibrand has come up with an interesting idea that, sadly, won’t get out of the starting blocks.

The New York U.S. senator, a Democrat, has proposed holding hearings on the sexual abuse allegations that have been leveled against Donald John Trump. You see, Gillibrand wants to call the president out on his call for “due process” relating to allegations of spousal abuse by a former key White House aide.

According to The Hill: “If he wants due process for the over dozen sexual assault allegations against him, let’s have Congressional hearings tomorrow,” she continued. “I would support that and my colleagues should too.”

Rob Porter has quit as White staff secretary. Two former wives and a former girlfriend have accused him of spousal abuse. One of the wives produced a picture of herself with a shiner under right eye; she says Porter punched her in the face.

Trump has come to Porter’s defense. He called him a fine man and said he “did a good job” as staff secretary. The president made no mention of the alleged victims of his attacks.

And he’s called for “due process” to determine Porter’s guilt or innocence.

Sen. Gillibrand wants to give Trump himself all the due process he needs regarding the many accusations that have been tossed at him by women who have alleged a number of sexual abuse transgressions.

Will Congress ever convene hearings? Please. Don’t make me laugh.

Gillibrand, though, has handed us a good idea to at least consider. 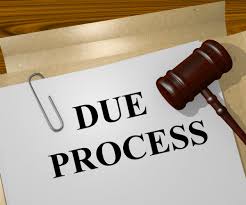 Donald Trump has had an epiphany. Maybe?

I’m trying to understand how this guy, the president, can call for “due process” when he’s demonstrated a remarkable and shameful tendency to forgo it when it involves his political foes.

Now he says that Rob Porter, the former White House staff secretary who’s accused by former wives and a former girlfriend of spousal abuse is entitled to “due process.” He and a former speechwriter, who also quit this week, are being railroaded out of their jobs by mere allegations, according to the president.

Wow! Can you believe it? The president insists on “due process” to determine their guilt or innocence.

Back when he just a mere hotel/real estate mogul, Trump called for punishing five young men who had been exonerated of raping a woman in Central Park. They were the Central Park Five. Trump didn’t think for a second about due process for those individuals.

How about when he was running for president and he declared his belief that U.S. Sen. Ted Cruz’s father was somehow implicated in the assassination of President Kennedy? Oh, his evidence was a photograph he saw in, um, the National Enquirer, of Rafael Cruz and Lee Harvey Oswald. I must mention that Cruz was running against Trump for the Republican presidential nomination. Due process? Hah!

Let’s not forget the “Lock her up!” chants regarding Hillary Rodham Clinton, Trump’s opponent in the 2016 general election. Trump campaign crowds would launch into the chant and, oh yes, Trump would egg them on. Did the former secretary of state and U.S. senator deserve “due process”? Or was she fair game just because she was a politician running for the same office as the guy who beat her?

If only the president would have shown as much concern for “due process” in the not-too-distant past. His previous carelessness only heightens the skepticism when he shoots off his mouth about this current spate of White House chaos.