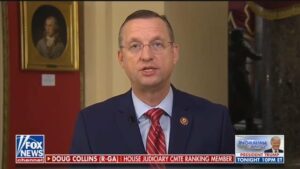 U.S. Rep. Doug Collins popped off on a cable news show this week that Democrats are “in love” with terrorists and are “mourning” the death of Iran’s leading terrorist, Gen. Qassem Soleimani in an air strike ordered by Donald Trump.

Democrats became outraged. They lambasted the Georgia Republican for his heartless comments.

Then he apologized. It was the real thing. Collins wrote on Twitter: “Let me be clear: I do not believe Democrats are in love with terrorists and I apologize for what I said earlier this week.”

I am speaking only for myself, but I accept Rep. Collins’s apology. I wish he hadn’t made that hideous statement in the first place. The apology doesn’t expunge the public domain of what he said.

However, his apology sounds to me like the real thing. I’m glad he had the guts to say he was wrong to say such a thing.