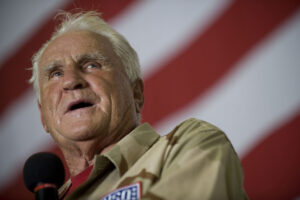 He was a great National Football League coach. He led the Miami Dolphins to the only undefeated season in NFL history, coaching them to a 14-7 victory in the 1973 Super Bowl over the Washington Redskins. He would coach the Dolphins to a second straight Super Bowl victory the following year.

Now, I want to offer this little tidbit that has been lost as the pro football world has long saluted the greatness of Don Shula. I do not mean to disparage him.

Don Shula also coached the Baltimore Colts in the 1969 Super Bowl, the third such game pitting the NFL champs against the American Football League champs.

The Colts lost that game, 16-7, to the New York Jets, the team quarterbacked by that brash youngster Joe Namath who reportedly “guaranteed” that the Jets would beat the Colts and elevate the AFL to parity with the more established NFL.

I don’t recall whether the Colts were outcoached, or whether the Jets simply outplayed them.

Still, that one history-making loss did not do a single thing to diminish the great record — the winningest record in NFL history — that became the hallmark of Don Shula’s fabulous career.