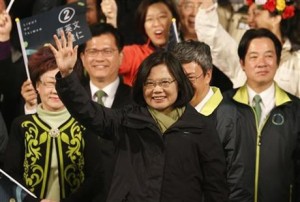 The world is full of complicated bilateral relationships: Greece and Turkey, India and Pakistan, Israel and Egypt.

A pair of nations, though, may have witnessed an event that makes their stunningly complex relationship even more so.

Taiwan has just elected its first female president, Tsai Ing-wen. It’s not her gender that complicates matters. It’s her longstanding support for something that sends government officials in the People’s Republic of China into orbit: Taiwanese independence.

Tsai leads the Democratic Peoples Party, which long has advocated that Taiwan declare its independence from the PRC.

However, there’s this tiny problem (actually, it’s huge). China considers Taiwan to be a “renegade province” that belongs to the mainland government, the communists who took over the country in a bloody civil war right after World War II.

The Kuomintang, which governed China, fled to Taiwan in 1949 and set up a new government.

For more than six decades, China has declared it wanted Taiwan back. Meanwhile, Taiwan grew into a powerhouse nation all on its own, independent of China.

Tsai’s victory isn’t likely to produce a declaration of independence in the next week, month or perhaps even a year from now.

However, it strains to the max a relationship that had been showing signs of thawing in recent years.

Allow me a bit of personal privilege here.

Taiwan had functioned under martial law until 1989. The ruling party felt it necessary to impose strict curfews and restrictions on its citizens, given the tremendous threat of violence posed by the giant neighbor on the other side of the Taiwan Strait.

The island has functioned famously since martial law was lifted.

But the threat of military action persists. The Taiwanese officials I have visited over many years have told me they take those threats seriously and have built a muscular military apparatus quite capable of inflicting damage on any nation in the world. The Taiwanese also have a defense pact with another significant nation: the United States of America, which has pledged to come to Taiwan’s defense in the event of war with, um, the PRC.

President-elect Tsai isn’t likely to do anything rash. At least that’s my hope.

Taiwan already is shut out of virtually all international associations: the United Nations evicted Taiwan in 1971 when it admitted the PRC; the United States severed official diplomatic relations with Taiwan when it recognized the PRC; the World Health Organization bans Taiwan’s participation.

The international community follows what’s called a “one-China policy,” meaning that the only “China” it recognizes is the big one, the PRC.

That’s all fine, except that Taiwan is, well, Taiwan. Most of its 24 million residents were born on the island and they have diminishing links with the mainland.

Yes, Taiwanese still speak Chinese. Their names look and sound Chinese. However, the country has developed into an entity that — for all intents — is independent already from China.

The problem remains, though, that it cannot declare officially its independence as long as those big, bad commies on the mainland keep threatening military action.

As China has shown over many years, it doesn’t like being lectured by other nations about how to conduct its affairs.

You want complicated? This Taiwan-China thing goes beyond my understanding of the word.