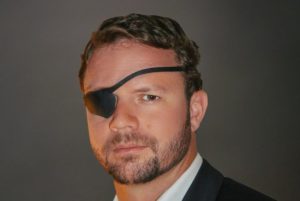 I didn’t know Dan Crenshaw from the man in the moon … until someone made a tasteless joke at Crenshaw’s expense on “Saturday Night Live.”

Then the young man became all the rage, the talk of the nation.

It turns out he is a newly elected Republican congressman from Houston. He’s also a former Navy SEAL who suffered a grievous injury fighting terrorists in Afghanistan. He lost an eye. The sight in his other eye is flawed. He has trouble keeping his balance and, as the Texas Tribune reports, he “misses” handshakes on occasion.

As the Tribune reported: Weirdly, his election wasn’t the biggest news in Crenshaw’s life last week. That came during the first minutes of Nov. 4 on the “Weekend Update” portion of “Saturday Night Live,” when cast member Pete Davidson, who gave a riff on the midterms, presented a photo of Crenshaw, eye patch on.

Rep.-elect Crenshaw, though, is a terrific sport. When cast member Pete Davidson made fun of his injury on “SNL,” many around the nation took offense. “SNL” creator Lorne Michaels invited Crenshaw on the show. Crenshaw at first balked, then he went on and returned the barbs to Davidson.

The congressman-to-be has become a political star as a result.

The Tribune published a lengthy feature about Crenshaw. Read it here.

I find this fellow’s story to be quite compelling and worthy of attention, even without his star turn on “SNL.”

He fought through a difficult Republican primary to be nominated, then knocked off a Democratic incumbent to win a seat in Congress representing his native Houston. He also is part of a congressional freshman class that includes 15 veterans, which I believe gives the next Congress valuable insight into the myriad issues — and problems — that our returning servicemen and women are facing.

I like this fellow’s story. I grieve for his terrible injury, but am proud of the way he handled himself in light of the flurry of controversy that swirled after the “SNL” joke went viral.

I wish him well as he takes on his new job representing his congressional district.