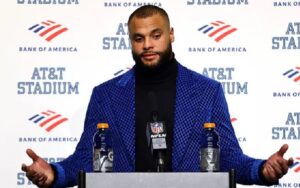 Dak Prescott came under intense fire for a comment he made after the Dallas Cowboys blundered their way into a first-round professional football playoff loss.

He seemed to endorse the notion that it was all right for unhappy fans at AT&T Stadium in Arlington, Texas, to throw debris at officials who, in their eyes, gave the game to the San Francisco 49ers.

Then came what I believe was a first-rate apology from the Cowboys’ quarterback. He said he is sorry for his remark. He didn’t offer one of those phony “if I offended anyone” non-apologies. Oh, no. Prescott stepped up and said he blew it.

He said this, via Twitter: “That was a mistake on my behalf, and I am sorry.”

I am willing, therefore, to offer a bit of grace to the young man.

I don’t really care about whether the Cowboys will ever win another Super Bowl. Sure, I live in the Metroplex and I am bombarded with Cowboys news all the time by local media. I get that.

However, I do care when young, highly paid professional athletes are able to act like grownups after they blurt out regrettable statements. Dak Prescott demonstrated to me that he is a grownup and I hope that this tempest blows over quickly.

I believe it will, largely because the man at the center of it offered a sincere apology.