Did I hear this correctly … that the 45th president of the U.S. might want to “primary” Texas House speaker Dade Phelan because of the way he is running the state House of Representatives?

Phelan is a Beaumont Republican serving his first term as the Man of the House. He succeeded another GOP speaker, Dennis Bonnen, who got himself into a jam after he lied about whether he would sacrifice fellow GOP lawmakers in the 2020 legislative campaign.

Donald Trump just needs to butt the hell out of Texas politics. We’ve got more than our fair share of nut jobs, fruit cakes and yahoos. We don’t need the former Yahoo in Chief meddling in our state’s business.

Phelan isn’t my kind of pol, but he is working under extreme pressure, given Democrats’ willingness and ability to stop the Legislature from doing its business, which they did already this year … and deservedly so.

I am just weary in the extreme of seeing the 45th POTUS’s name attached to this and/or that political skirmish.

He annoys me in the extreme. 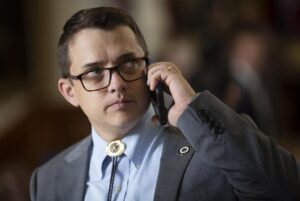 Hang on a second, Mr. Speaker of the Texas House of Representatives.

Speaker Dade Phelan talked a good game about working across the aisle when he took the gavel at the start of the current Texas Legislature. Then he makes what I consider to be a peculiar committee chair appointment that seems to run counter to his hopeful bipartisan talk.

Briscoe Cain, a Deer Park Republican, is the new chair of the House Elections Committee. Why is that a head-scratcher? Well, Cain spent some time in Pennsylvania seeking ways to overturn the results of that state’s presidential vote total, which awarded its electoral votes to Joe Biden, the Democrat who defeated Donald Trump.

He was looking for evidence of vote fraud that Trump kept insisting occurred in that state and others that voted for Biden.

Cain said Texans deserve to know their elections are being run fairly, legally and without bias. I believe they are run that way. What I am having trouble understanding is how someone with a known history of pursuing what I call The Big Lie about the 2020 election should be given a committee chairmanship in Texas. I am left to wonder whether Chairman Cain is going to lead his committee on similar wild goose chases looking for vote fraud that no one can prove exists in Texas.

It smacks to me of the kind of foolishness put forth by Lt. Gov. Dan Patrick, who offered to pay someone — anyone! — a million bucks if they could find vote fraud in Texas. He hasn’t paid any money … because there isn’t any fraud to be found!

This appointment by the shiny new speaker of the House also makes me cringe just a bit that Speaker Phelan isn’t quite the seeker of bipartisanship that he told us he would be as the Man of the House.

I want Speaker Phelan to disprove my fear. This appointment doesn’t do much to assuage my concern.

Note: A version of this blog post was published initially on KETR.org.