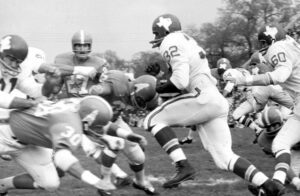 I cannot help but chuckle at the Dallas-Fort Worth media’s concentration on a certain aspect of the American Football Conference champion Kansas City Chiefs, who are heading to the next Super Bowl next month in Miami.

It’s the Dallas connection that gives me a giggle or two.

The Chiefs came into being in 1960 as the Dallas Texans. Then the owner of the franchise moved the team to Kansas City, where they became the Chiefs. The owner was Lamar Hunt, a young Dallas business mogul. He went on to build the Chiefs into an American Football League powerhouse.

The media are all over the Dallas connection and keep reminding viewers and readers that the Chiefs are actually direct descendants of the team that was born in Dallas but gravitated a bit north nearly 60 years ago.

It’s OK. You have to look for ways to retain interest among viewers and readers. The media here are doing their level best in that regard.