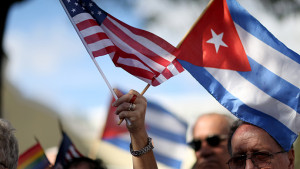 The governor could have dug in his heels and condemned the move — as many of his fellow Republicans have done — as a sop to a repressive dictatorship that has a horrible human rights record.

Instead, he chose the more pragmatic approach. He sees the move as a potentially huge boon to Texas business and industry, which is why he’s leading a large trade delegation today to the island nation.

Abbott is no dummy. He believes that Cuba presents Texas with a growing market for state-produced goods and commodities, which is why he has decided to hang his partisan hat on the rack.

A Texas A&M University study says that increased trade between Texas and Cuba could produce as much as a $43 billion total impact on the Texas economy and more than 250 permanent jobs.

The long history of frostiness between the United States and Cuba is well known. The communist government has been deemed an “enemy” of the United States. There once was a missile crisis on the island that brought the world close to a world war.

The Soviet Union has disintegrated. Cuba remains one of the few Marxist nations on Earth.

However, Cuba no longer presents a direct threat to the United States.

Instead, it presents opportunities for the U.S. government and private businesses — not to mention individual state governments and businesses — to exploit.

Sen. Marco Rubio wants to be president. To do that he’s got to sound reasonable.

The young Florida Republican, by golly, is starting to get some traction on the reasonableness bandwagon.

One’s sexual orientation, he said today on “Face the Nation,” is not a choice. It’s who that person is.

He stops short of endorsing gay marriage, though. He believes marriage should be a union involving a man and a woman. He says he favors “traditional” marriage.

I am heartened, though, to understand that he does not buy into the tripe being tossed around that someone states a “preference” for being intimate with someone else. I’ve long believed sexual orientation — whether it’s heterosexual or homosexual — is part of a person’s DNA.

I’m glad to see that Marco Rubio understands it, too.

Now, if we can just get him to change his mind about normalizing relations with Cuba …