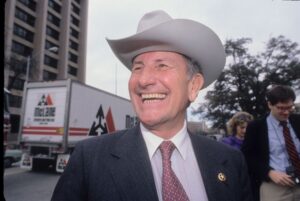 I never thought of Clayton Williams as a political trailblazer.

Then comes word today that Claytie — a Midland oil and natural gas tycoon who ran for Texas governor in 1990 — has died at age 88.

I extend my condolences to Williams’ friends and family. I do want to offer a comment on his single, but futile run for public office.

He sought the governorship running against the late Texas Treasurer Ann Richards — who had rocketed to national notoriety with her stellar 1988 Democratic National Convention keynote speech in which she declared that then-GOP Vice President George H.W. Bush “can’t help it, he was born with a silver foot in his mouth.”

Richards and Williams, a Republican, faced off two years later. Williams was poised to win. Then he started committing a series of gaffes. He compared inclement weather to rape, urging Texans to “relax and enjoy it”; he refused to shake Richards’ hand at an event, a gesture that rankled many Texans who believe a gentleman shouldn’t act that way toward a woman; then he revealed he didn’t pay federal taxes when the oil industry was collapsing in the 1980s.

Richards won the governorship. She served a single term before losing in 1994 to the “silver-footed” VP’s son, George W. Bush.

The Texas Tribune’s Ross Ramsey makes a fascinating point, though, about Williams’ political legacy. He notes that Bill Clements was the lone Republican to win the governorship since the Civil War Reconstruction era. Williams lost in 1990, but well might have paved the way for “W” to win in 1994.

Since then, according to Ramsey, Republicans have clamped a vise grip on the governorship, as well as every statewide office.

The things you can learn …

A video segment from today’s opening of the Senate Judiciary Committee confirmation hearing on Brett Kavanaugh’s nomination to the Supreme Court has gotten a whole lot of attention.

As Kavanaugh was leaving the hearing room, Fred Guttenberg — whose daughter was among those slain by the gunman at Marjory Stoneman Douglas High School in Parkland, Fla. — extended his hand, apparently to shake Judge Kavanaugh’s hand.

The judge turned away. He didn’t take Guttenberg’s hand.

I do not know what Guttenberg might have said to Kavanaugh to prompt such a chilly non-response to what looked like a gesture of common courtesy. Maybe the grieving father said Kavanaugh’s wife wore combat boots, or some such childish statement.

Surely the dad didn’t accuse Kavanaugh of complicity in the mass shooting. Surely he didn’t tell him he is responsible for the tragedy that erupted on Valentine’s Day.

So, why did the judge turn his back? Doesn’t a father in mourning deserve a handshake and an expression of good wishes?

These kinds of images have a way of imprinting themselves into observers’ collective memory. Just as Midland, Texas, oil mogul Claytie Williams who snubbed a handshake from Gov. Ann Richards during the candidates’ campaign for Texas governor in 1990. Williams paid for that rudeness by losing the election. 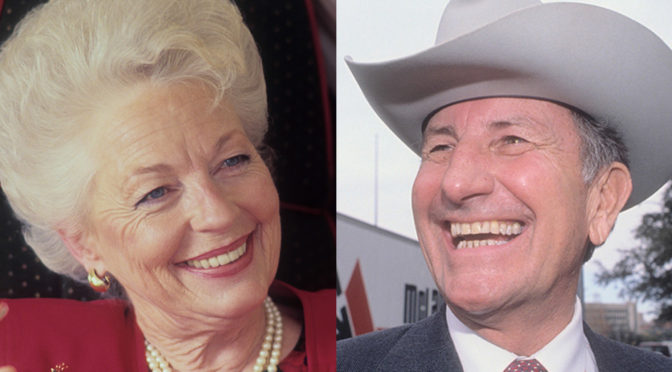 I feel like a man who’s ahead of the curve.

I recently wrote about Republican presidential nominee-to-be Donald J. Trump’s insult-inspired campaign and how it might play with voters. In that piece, I mentioned some resemblance that his campaign has with another campaign from an earlier era.

Well, lo and behold! It turns out that the Texas Tribune has drawn the same parallel.

We political junkies have the prospect of an intensely negative presidential campaign between Trump and Democratic nominee Hillary Rodham Clinton.

As the Tribune reports: “If Williams’ 1990 race for governor in Texas is any guide, the 2016 presidential campaign will get even nastier. Williams’ Democratic opponent was Ann Richards, at that point a former Travis County commissioner and the sitting state treasurer, a seasoned and well-connected politician of a liberal stripe. ”

Williams was a wealthy oil and gas mogul. He also dabbled in real estate and telecommunications. He campaign as a plain-spoken West Texan.

Richards presented herself with her trademark humor. She also was tough and relentless in her criticism of Williams.

The campaign got nastier and nastier as it progressed. The final straw occurred in Dallas when Williams refused to shake Richards’ hand that she extended to him during a joint appearance. He called her a “liar” because of a harsh ad her campaign ran a blistering ad accusing a bank that Williams owned of laundering drug money.

Is history going to repeat itself?

Williams was leading Richards early in that campaign. She kept pounding him and eventually won that race.

The Tribune reports: “How does 1990 inform 2016? Like Clinton has done to Trump, Richards turned Williams’ own words against him: Her campaign ads included direct quotes from Williams, enough to turn off many voters. Richards shifted to turn out her base, especially women, and campaigned in areas of strength. Clinton will do much the same, especially in emerging battlegrounds like New Mexico and Colorado.”

Yes, indeed. Something tells me history actually will repeat itself. 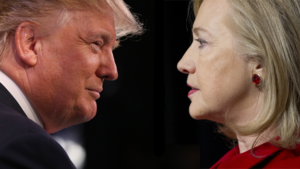 “No,” she answered, “He can run a campaign on insults. We’re going to campaign on the issues.”

What, pretell, are those issues? She said she’s going to keep reminding voters that Trump is “temperamentally unfit to be commander in chief.”

There you have it. Clinton said she’s going to campaign “on the issues,” and then spoke candidly about her presumptive Republican opponent’s temperament.

The question now facing the Republican Party brass that is gritting its teeth over whether Trump is capable of keeping his cool is: How is he going to respond?

They fear — with good reason — that Trump is fully capable of flying off the rails. He’s shown that propensity all along the campaign trail so far.

Here’s a scenario that could repeat itself. Longtime observers of Texas politics will remember when this happened.

The two of them shared a dais at an event late in the campaign. They each spoke to the crowd. Then as the event drew to a close, Richards walked over to Williams and extended her hand.

Williams refused to shake it. He called Richards a “liar.”

News photographers and TV cameras picked up the snub and reported all over Texas. How did the optics play? Not well … at all!

Williams’s refusal to “shake the hand of a lady” insulted a lot of Texans vicariously.

Something tells me — if Clinton keeps talking “issues” relating to Trump’s temperamental fitness — that Donald Trump is fully capable of repeating Claytie’s mistake.

This one flew across my radar today. I cannot let it go without a brief comment.

One-time presumptive “frontrunner” for Texas governor Clayton Williams has given a six-figure donation to the campaign of current presumptive frontrunner Greg Abbott.

Oh, my. I need to catch my breath.

You’ll remember Claytie Williams. In 1990, he snatched defeat from the jaws of victory in his race for governor when he ran against then-Texas Treasurer Ann Richards. He was leading in most reputable polls. The Republican Midland oil man was a shoo-in.

Then he did two very stupid things:

* First, he refused to shake Democrat Richards’ hand at a public event. He called her a liar. Cameras all across the state captured that magical moment. Williams offended many Texans by refusing to take a lady’s hand. You don’t do that in Texas, Claytie.

That wasn’t the worst of it.

* He then compared rape to the weather. He said a woman who’s about to be sexually assaulted and brutalized by a man should think of it as bad weather and just sit back and relax.

Richards then became the state’s governor.

I am wondering if another high-profile Abbott supporter, has-been rocker Ted Nugent — who’s got his own history of sexual criminal activity in his background — is going to pony up some big cash for his man, the attorney general.

I’m now waiting for Claytie and the Motor City Madman to make a joint appearance together on behalf of the man they’re supporting for Texas governor.

I’ve noted before how Texas politics is a contact sport.

The source of that description came to me from the late great Democratic U.S. Sen. Lloyd Bentsen. It’s more than mere contact, however. At times it becomes a blood sport.

Take the Republican runoff race for Texas lieutenant governor or the GOP runoff contest for state attorney general. Lt. Gov. David Dewhurst and state Sen. Dan Patrick of Houston are going at each other hammer and tong. It well might be that the Dan Branch-Ken Paxton contest for AG is even nastier, with Paxton running TV ads accusing Branch of being a — gulp! — “liberal Republican” who voted for third-trimester abortions and has backed the dreaded Obamacare.

This kind of campaigning isn’t new to Texas.

The Texas Tribune looked back at the 1990 Democratic race for governor as its prime example of how low it can go.

Attorney General Jim Mattox squared off against State Treasurer Ann Richards. They finished at the top of the primary heap that year and faced each other in a runoff for the party nomination.

Mattox actually accused Richards of using illegal drugs. Richards, a recovering alcoholic, had been clean and sober for many years. That didn’t matter to the bulldog Mattox, who made the accusation during a live TV debate with Richards, according to the Tribune.

Richards would win the runoff and would go on to beat Republican oilman Clayton Williams in the fall after Williams (a) made that terrible gaffe about rape and how women should “just relax and enjoy it” and (b) refused to shake Richards’s hand at an event they attended jointly, instead calling her a “liar” within hearing distance of an open microphone.

Yes, we should lament the nastiness of these current campaigns. Let’s not get too overwrought about them, however. They’re hardly new creations of this new age.

This nastiness is part of what makes Texas politics so, um, invigorating.