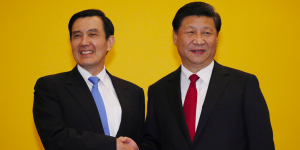 The world has been fixated on hot spots such as the Middle East, Africa and, to a lesser degree, Europe.

But while most of us were looking the other way, the leaders of two countries met, shook hands and talked to each other like neighbors rather than bitter political enemies.

China’s president, Xi Jinping, met with Taiwan’s president, Ma Ying-jeou. Why is this a big deal? It’s the first meeting between the nation’s heads of state since 1949, when Taiwan broke away from “Red China” and formed a new nation on an island just a few miles off the Chinese coast.

China doesn’t recognize Taiwan as an independent nation. It still considers the thriving island nation as a renegade province and has, over the decades, vowed to retake Taiwan.

Good luck with that.

I’ll stipulate here that I’ve visited Taiwan five times dating back to 1989. I’ve heard the Taiwanese side of the 65-year-old dispute. I haven’t heard the People’s Republic of China’s side of it.

The PRC launched a civil war after World War II. It sought to overthrow the government of Chiang kai-Shek. It succeeded in 1949. Chiang set up shop in Taiwan and proceeded to build a thriving nation that for decades operated under martial law; Taiwan lifted martial law in 1989 and it has become a bastion of freedom and democratic rule.

A lot has happened in Taiwan, as much has taken place in China.

At this moment, the vast majority of Taiwanese are natives of the island, with little direct tie to the mainland. The nation has operated as a de facto independent state, but without the perks that accompany sovereignty, such as membership in world organizations such as the United Nations or the World Health Organization.

“Today marks a new chapter in the cross-strait relationship,” Xi told journalists. “The separation of families on both sides of the Taiwan strait has caused deep pain and regrets to countless families.”

Ma, though, faces opposition in Taiwan to the meeting. He has sought to build closer ties with China. Opposition parties, such as the Democratic Progressive Party, want to declare formal independence.

The PRC is unlikely, so many years later, to reacquire Taiwan. For its part, Taiwan is likely to continue to thrive independently of the PRC. It’s a curious and deeply complicated relationship that the two nations are beginning to form.

My hope is that they keep talking. It is better to talk to your adversaries than to fight with them. Given the stakes involved in the event of all-out war — and the fact that the United States of America maintains a defense pact with Taiwan — the nations’ leaders need to keep the lines of communication wide open.

The meeting the other day is a start.

You have to hand it to the brass at the Pentagon, not to mention the commander in chief.

With foreign policy crises either erupting or about to erupt in places like Iran, Syria, Egypt, Libya, North Korea and sub-Saharan Africa, the folks at the Pentagon decide to provoke China by flying B-52 bombers into airspace the Chinese claim as their own.

China has declared ownership of space over some mineral-rich islands near the coast of Japan. The Japanese also claim that territory. Who’s right is just about anyone’s guess.

Now comes the United States, with its immense military presence in the region. The Air Force launched a couple of B-52s over the disputed area. The Chinese responded by sending their only aircraft carrier into motion, along with a couple of guided-missile frigates.

Nothing happened. No shots were fired.

I’m betting the United States isn’t going to let China bully Japan — our key ally in East Asia. Heaven knows the Chinese have done a number on Taiwan for many years, claiming that the now-independent nation remains part of the mainland empire, given that Taiwan created a separate government after fleeing the mainland in 1949 after losing a bloody civil war with the communists who now run China.

I also should add that Vietnam, another ancient foe of China, is worried about Chinese aims on the region. Vietnam and China fought a fierce border war in the late 1970s after the United States withdrew its forces from Vietnam in 1975.

What are the Chinese up to remains anyone’s guess.

They do understand the showing of force, which is the United States did with the B-52 flyovers. Yes, the birds were unarmed — but there’s plenty of firepower nearby.