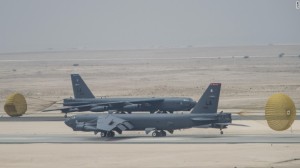 The Pentagon has deployed an unspecified number of the Cold War-era strategic bombers to Qatar to take part in the fight against the Islamic State.

The brass says the aircraft bring “multi-platform” forms of firepower to rein down on the terrorists. The Air Force describes the weaponry as precise and finely tuned to hit military targets.

The B-52 remains one of the U.S. Air Force’s most potent weapons. It went into operation in the 1950s and has gone through several upgrades over the decades.

It poured thousands of tons of ordnance on North Vietnamese and Viet Cong targets during the Vietnam War. The planes played a key role in softening up Iraqi troop positions during the Persian Gulf War in 1990-91.

Now the Islamic State is about to feel the wrath of a weapon that our nation’s enemies always have feared on the battlefield.

My very first visual sight of the Vietnam War occurred as I peered out the window of a jetliner en route to Bien Hoa, South Vietnam in the spring of 1969. I looked down and saw a flight of the big birds flying out over the ocean after, I presume, completing a bombing run over South Vietnam.

Once I settled in at our Army aviation base near Da Nang, I could hear the thunder to our west as the planes fulfilled their mission. It was music to our ears, but it meant something quite different to those on the receiving end.

I welcome the news of the B-52 coming back into active wartime duty. I’m quite certain the terrorists who are about to find themselves on the receiving end of some serious pain will not.

You have to hand it to the brass at the Pentagon, not to mention the commander in chief.

With foreign policy crises either erupting or about to erupt in places like Iran, Syria, Egypt, Libya, North Korea and sub-Saharan Africa, the folks at the Pentagon decide to provoke China by flying B-52 bombers into airspace the Chinese claim as their own.

China has declared ownership of space over some mineral-rich islands near the coast of Japan. The Japanese also claim that territory. Who’s right is just about anyone’s guess.

Now comes the United States, with its immense military presence in the region. The Air Force launched a couple of B-52s over the disputed area. The Chinese responded by sending their only aircraft carrier into motion, along with a couple of guided-missile frigates.

Nothing happened. No shots were fired.

I’m betting the United States isn’t going to let China bully Japan — our key ally in East Asia. Heaven knows the Chinese have done a number on Taiwan for many years, claiming that the now-independent nation remains part of the mainland empire, given that Taiwan created a separate government after fleeing the mainland in 1949 after losing a bloody civil war with the communists who now run China.

I also should add that Vietnam, another ancient foe of China, is worried about Chinese aims on the region. Vietnam and China fought a fierce border war in the late 1970s after the United States withdrew its forces from Vietnam in 1975.

What are the Chinese up to remains anyone’s guess.

They do understand the showing of force, which is the United States did with the B-52 flyovers. Yes, the birds were unarmed — but there’s plenty of firepower nearby.

The Air Force wants to upgrade its B-52 bomber fleet. My hunch is that the bird will be performing missions for the United States until hell freezes over … meaning forever.

Have you ever noticed the absence of the term “aging” when referring to the B-52? It’s been operational for more than 50 years and is still performing the mission for which it was built, which is to inflict heavy damage on enemy forces.

My story is brief, but fascinating — at least for me.

I was en route to Vietnam in March 1969. My TWA charter jetliner had departed from Oakland, Calif., with stops in Honolulu and Okinawa. We left Okinawa and were headed to Bien Hoa airport in South Vietnam.

As we approached the coast of Vietnam not long after dawn, I peered down from my window seat and saw plainly below us a formation of B-52s heading in the opposite direction. They were painted in jungle camouflage colors — as if that would make them more difficult to spot from the ground? I don’t know their destination, but I’m presuming it was perhaps to Guam, where the Air Force ran a huge bomber base during the Vietnam War.

We continued on and I saw bomb craters all over the landscape as we started our descent into Bien Hoa. I cannot attest that B-52s created the craters, but I’m guessing it’s a good bet they did.

That was 44 years ago. The B-52s hadn’t been in service all that long.

I would hear the big birds at work once I reported to my post at Marble Mountain, just south of Da Nang. I took comfort then as a young soldier in the constant rumbling we would hear on the other side of the mountains.

The LA Times reports that the fleet is about a tenth of the size it was during the B-52s’ heyday. Still, the Air Force wants to keep them in service. I’m not betting on anyone grounding the remaining B-52s any time soon.