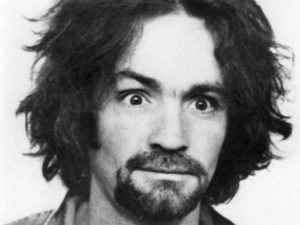 A dear longtime friend of mine sent me a message today, imploring me to “take a break from politics.” My friend suggested I should comment on the death of Charles Manson, who croaked overnight in a southern California hospital.

I thought about that for a moment and sent him back this message:

“They ought to feed a flock of buzzards with his corpse.”

I didn’t say this, but I should add that I hope Manson rots in hell for eternity. I am quite certain that’s where what passes for this individual’s soul is headed.

That’s all I am going to say about this monstrous individual. And please spare me the lecture about how “in-Christian” it sounds for me to say these things about someone once called “the most dangerous man in the world.”

I also suggested that a nation that was horrified at the 1969 murders committed at Manson’s direction should honor the memories of the victims.

They deserve our attention and our prayers as we recall the shocking depravity that all too often consumes the worst of us.

Vincent Bugliosi earned his chops when he prosecuted one of the most hideous crimes of the 20th century and sent several ruthless killers to prison for the rest of their lives.

He then became a successful author and in the process wrote, in my view, a definitive historical account of another infamous murder.

Bugliosi died overnight of cancer at the age of 80. He’ll be remembered mostly for putting Charles Manson behind bars for his role in the 1969 murder of actress Sharon Tate and several others. Manson remains in prison. He becomes eligible for parole every few years. It’s a waste of time to consider this guy for release, even though the law gives him the opportunity to be heard.

Bugliosi’s prosecution of Manson will be the highlight of the lawyer’s stellar legacy.

Then he wrote “Reclaiming History,” which took more than two decades to complete. The 2,000-page tome spells out in excruciating detail that Lee Harvey Oswald acted alone in killing President John F. Kennedy on Nov. 22, 1963.

The way I see it, anyone who reads this massive piece of research should understand that the idiotic conspiracy theories that have lingered since JFK’s death — and which will live forever — do not hold up under scrutiny.

Bugliosi’s essential premise in debunking the conspiracy theories is that the idea that a loser such as Oswald could commit such a horrific crime and change the course of world history just cannot be accepted by some. But he did.

This man left two distinct marks on society during his time among us: He imprisoned a fearsome killer and his band of followers and he sought to put to rest the nutty notions surrounding the murder of the president of the United States.

Thank you for both, Mr. Bugliosi.

Didn’t you just know this engagement was too good to be true?

Well, it turns out Burton loved Manson only for his corpse. She allegedly intended to pickle Manson’s remains after his death and display his body, a la V. I. Lenin, Mao Tse-Tung and “Uncle Ho” Chi Minh. She thought it would be a swell tourist attraction, bringing visitors from miles around to see the body of the man who orchestrated those grisly murders back in July 1969.

Manson is serving a life sentence for his role in the deaths of actress Sharon Tate and others in California. He won’t be eligible for parole again until 2027, when he’ll be 92 years of age.

It’s a pretty safe bet to assume he won’t get out of prison.

Now it’s been revealed that when Manson realized his sweetie wanted only his remains, he figured he’d been snookered.

Mark David Chapman has been denied parole yet again.

For the life of me, some elements of the criminal justice system seem unsolvable. Such as why someone like this ever would be considered for parole.

Chapman shot John Lennon to death on Dec. 8, 1980. As the parole hearing today noted, the officers interviewing Chapman denied him parole because “the victim,” Lennon, showed kindness to his killer before the bullet started flying that night in New York City.

The former Beatle had signed Chapman’s copy of Lennon’s new album, chatted briefly with him, boarded his limo and then returned later in the evening — to meet his bloody death at Chapman’s hand.

“This victim had displayed kindness to you earlier in the day, and your actions have devastated a family and those who loved the victim,” the parole board wrote. Among those who “loved” John Lennon was, well, me and millions of others around the world.

Chapman is among the world’s most notorious murderers who go through this parole ritual every couple of years, only to be denied. Two other stand out:

* Sirhan Sirhan, Sen. Robert F. Kennedy’s killer, gets the same treatment. As he should. Sirhan’s gunning down of RFK, it’s been argued, changed the course of political history in this country as Kennedy died while campaigning in June 1968 for the presidency of the United States.

* Charles Manson, who ordered the murders of actress Sharon Tate and several others in 1969, is a raving bleeping lunatic. If you’ve ever listened to this man talk — today — about what happened 45 years ago, then you understand that he needs to stay locked up forever.

Chapman has exhibited all the signs of a sociopath, someone with no conscience. OK, so John Lennon wasn’t a world leader. He was a musician and a songwriter whose work still stands as an anthem for several generations of people all around the world.

Good night, Mark David Chapman. May you rot in that cell.